This page is for the evil bastard Motormaster. For the traveling angel of peace, see Motormaster (SG). 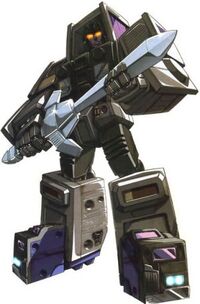 On the road, there is not a 16-ton hunk of rolling steel more cold and cruel than Motormaster. He shows mercy to none, least of all the unfortunate human drivers who happen to be sharing a highway with him. He'll brutally barrel through any traffic tie-up - he'd even roll over a baby carriage if it were in his way. He doesn't care - he knows nothing on wheels can survive a collision with him, except, perhaps, Autobot Leader Optimus Prime - and Motormaster would give you an argument on that. In fact, he looks forward to that very confrontation so he can destroy Optimus and claim, without reservation, he is "King of the Road." His Stunticon followers tremble before his commands, which he gives with a thundering voice that has the hollow, doom-laden tone of an echo from a bottomless well. They hate him, but they fear him too much to disobey him.

In truck mode, Motormaster is virtually unstoppable. At his top speed of 140 mph, he can ram a 20 foot-thick block of concrete and crumble it without cracking a headlight. In robot mode, he has enormous strength and carries an atom-smasher cannon, which shoots a high-energy beam of protons that can shred all but the densest materials. He combines with his fellow Stunticons to form the giant robot Menasor.

Other than being highly fuel-consumptive, Motormaster has no known weaknesses.

Motormaster was one of the Stunticons who was brought to life by Vector Sigma, immediately pledging his loyalty to Megatron. Although the Stunticons often fought the Aerialbots, Motormaster's great desire was to off Optimus Prime.

As Megatron searched for the Pearl of Bahoudin in Turkey, he became aware of the Autobots' involvement in the cross-country Europa 2000 ending only miles from his dig site. In order to prevent interference, he commissioned Motormaster and the Stunticons to prevent any Autobots from making it to the finish line. Motormaster personally saw to the disposal of the Autobots' stunt driver, Wheeljack. It was an extended battle between skill and power, but the Stunticon leader eventually caught his prey by crushing him underneath his massive frame.

On another mission from Megatron, Motormaster dispatched his fellow Stunticons to collect several scientific components which the Constructicons needed to finish a new Super Weapon. Motormaster himself stole the world's largest and most perfect ruby from its place in a museum. His path back to base was blocked by Optimus Prime himself, giving Motormaster his long-awaited chance to prove he was the true "King of the Road." After he and Optimus rammed into each head-on at full speed, though, Prime only had a slight headache while Motormaster blew out his tires, crumpled his trailer, broke his windows and shattered his ego. Beaten and bruised, Motormaster and his fellow Stunticons were all towed back to the Ark and held prisoner. Unaware of Megatron's full plans for the components, the Autobots conceived of a scheme to infiltrate the Decepticon camp disguised as the Stunticons, using camouflage paint to alter their appearances. To add insult to injury (well, injuries), Optimus Prime took Motormaster's place among the faux Stunticons. After the Autobots left, though, Breakdown managed to vibrate himself loose from his cage and let Motormaster and the others free as well. They merged to become Menasor and swept aside the meager resistance the Autobots put up at the Ark. Flying to Megatron's hidden construction site as Menasor, the Stunticons confronted their impostors and exposed the Autobots' Trojan Horse play. Still, Prime had arranged a double-cross and had tampered with the ruby's properties, causing Megatron's Super Weapon to explode after only a short use. Menasor fled, and the other Decepticons quickly followed suit.

When Starscream attempted to overthrow the Decepticons using his personal brigade, the Combaticons, Megatron attempted to summon the Stunticons for aid, but they were too busy with a demolition derby to get involved right away. Eventually, though, their eleventh-hour intervention proved the key to victory. Starscream's gestalt, Bruticus, had already defeated Devastator, but was weakened by the conflict. Motormaster convinced his fellow Stunticons that Starscream wouldn't know when to quit and that they'd better ensure Megatron stuck around. Combining into Menasor, it took them little more than a single hit to bring down the Combaticons' Bruticus form.

On the MUX, Motormaster's rivalry has grown to include Stormwind as well.

Motormaster's on screen, and almost immediately a snapshot comes up of Hot Rod crumpled up into a crushed cube. "Another Autobot destroyed." Another shows Slag being shot with electricity, "And another Dinobot routed. If the rest of you would actually do your jobs, we'd have this war WON by now!"

The memo cuts off immediately.

Motormaster appears on screen, bloodied and enjoying it. "Some shuttle filled with a bunch of losers and wimps crashed over near Tesarus. Can't imagine how that happened. Anyway, Razorclaw and I just happened to be nearby when it happened. Figured we'd round up a few slaves for the Kaon pits, a few to go in the car crusher, and a few go to whatever Razorclaw wants. So get this. Ole Knightmare shows back up, and is all 'I'm like an Autobot or something'. So the King of the Road here..." He jerks his thumb at himself, 'And Razorclaw, we send her packing, hard. She's trying to fly away, and Razorclaw just keeps ripping armor off of her, and I run her through. So she scrambles away finally...I gotta say that I think I'm going to have to wreck Valvolux now..and pit her weaklings up against Menasor!"

He smashes his fists together.

The Shattered Glass universe is a twisted reflection of our own.

On the road, there is not a 16-ton hunk of rolling steel more warm and kind than Motormaster. He shows mercy to all, most of all the fortunate human drivers who happen to be sharing a highway with him. If he can, he'll stop to help anyone who needs it - even if it's something as simple as a lost motorist needing directions. He is a very careful driver, and the few times he loses his temper are when the Autobot Seekers endanger other vehicles. He tries his best to keep combats off the road and away from innocent civilians. His Stunticon followers leap to follow his commands, which he gives with a thundering voice that inspires confidence in all who hear it. They love him, and respect him too much to disobey him.