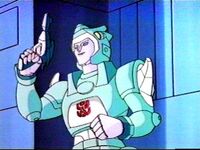 MOONRACER regards herself as the best shot on Cybertron, if not the galaxy, and she is quick to show off to anyone she encounters. She is reckless and headstrong, but is an expert pistol marksman, and specializes in trick shots. She tends to disobey her commanders when she thinks she knows better, with mixed results. She feels bad if her actions hurt the team, but she seldom learns from her mistakes. In robot mode, she wields a quick-draw laser pistol, for which she's earned her renown. In cybercar mode, she is amazingly fast over unbroken terrain, breaking 300 mph easily. Always eager to show off her skills, Moonracer tends to get into trouble often, and constantly requires the help of her friends.

Amongst her colleagues, Moonracer is the joy and the laughter. The bubbly little sister, Moonracer is full of naïve optimism and, to the dismay of her partners-in-guerilla warfare, pratfalls. She worries that others, either friends or enemies, don't take her seriously and dismiss her as simply being cute. But she'll show them. She'll show them she too can be hardcore.

Four million years ago, Moonracer tried to board the Ark while it was being attacked, with the rest of Elita One's team. The plan failed though, and she and the others appeared to be destroyed.

Moonracer was part of a team of Female Autobots on Cybertron, long believed to be extinct. While stealing energon from a Decepticon stockpile with her teammates Firestar and Chromia, Moonracer tried to take more than they needed and, in the process, tripped an alarm.

Shockwave thus discovered that the Female Autobots still existed and, by sending drones after them, was able to estimate the location of their underground base. Shortly thereafter, in an attempt to capture the squad's leader, Elita One, Rumble used his piledrivers to cause a cave-in inside the Female Autobots' underground base, trapping them there. It was Moonracer's idea to detonate the energon cubes they had stolen, and that she had stashed away safely prior to the attack, in order to blast their way out, which proved to be a succesful plan. In search for Elita One, they met up with a few of the Earth-stationed Autobots, who had come looking for Optimus Prime. Among them also was Powerglide, a friend of Moonracer. As the Earth-stationed Autobots were in a fight with the Decepticons, Moonracer and her colleagues immediately came to their aid. This temporarily turned the tide, though it was not until the arrival of the two missing commanders that the Autobots managed to actually win.

With the Decepticons defeated and their underground headquarters destroyed, Alpha Trion relocated the Female Autobots to a new base of operations.

Moonracer remains an active member of Elita One's team. In 2006 she joined the Wreckers.

According to Powerglide, Moonracer is the best sharpshooter in the galaxy.