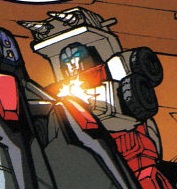 As much as Mixmaster enjoys being a chemist, his real love is music. He constantly hums himself as he works, and any chance he gets he breaks loose and lays down some sweet tracks for the other Constructicons. He sees himself as the morale officer of the group, and tries to keep Hook’s spirits up when the surgeon gets down on himself for not being able to do enough to save everyone.

While having the appearance of a standard concrete mixer, Mixmaster can, by using various acids and bonding agents, reduce and recombine virtually any substances put inside his drum and use them to form new substances. He is a chemistry lab on wheels. Atop the roof of his cab, he can mount a powerful infrared cannon which emits bursts of 8000° C heat for an effective range of .8 miles. In robot mode, he carries a laser pistol and a shoulder-mounted optical distortion projector, which, by bending light waves, disorients the vision of anyone caught in its field. When combined with his fellow Constructicons, he once served as the left leg module in the giant robot known as Devastator.

Mixmaster gets along well with Soundwave, and longs for a time when he can spend less time building war fortifications and more time jamming with his friends.

The Constructicons did not initially have the power to merge into Devastator. That ability was given to them by Megatron after Optimus Prime tried and failed to warp their minds into servitude with the Robo-Smasher. The two Constructicons Optimus did warp, Hauler and Grapple, used their friendship with Omega Doom to lure him to Prime, who used the Robo-Smasher to warp the guardian robot's mind. Prime succeeded and created a burning desire for destruction in Omega.

In 2012 Mixmaster operated out of Darkmount, but in 2016 was assigned to a ship heading to Earth to pick up energon for a full-scale assault on the Autobots on Cybertron. The ship was attacked en route, and Mixmaster only survived by hiding from the invading Autobots.

Mixmaster is played by CalihexInmate.