View source
This article is about the evil Constructicon chemist - for his goody-two-shoes Shattered Glass incarnation, see Mixmaster (SG). 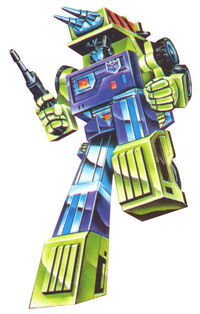 Nothing is safe from Mixmaster's seething cauldron. He will use any material necessary, whether unliving rock or living robot, in the making of some new material. He's been known to swallow up brand new limousines and reduce them to steel girders. And he performs his often grisly tasks with an evil, cackling glee that more befits a medieval witch than a Constructicon. The manner in which he creates new materials resembles an arcane ritual. Sometimes his fellow Decepticons wonder if perhaps Mixmaster hasn't a few microchips loose in his logic center, but they never question the results of his efforts.

While having the appearance of a standard concrete mixer, Mixmaster can, by using various acids and bonding agents, reduce and recombine virtually any substances put inside his drum and use them to form new substances. He is a chemistry lab on wheels. Atop the roof of his cab, he can mount a powerful infrared cannon which emits bursts of 8000° C heat for an effective range of .8 miles. In robot mode, he carries a laser pistol and a shoulder-mounted optical distortion projector, which, by bending light waves, disorients the vision of anyone caught in its field. When combined with his fellow Constructicons, he serves as the left leg module in the giant robot known as Devastator.

Mixmaster's mixing drum can be rendered inoperative by the addition of certain chemicals, particularly alkalides.

According to Omega Supreme, Mixmaster and the Constructicons were nice guys on Cybertron several million years ago, and built Crystal City, of which Omega was guardian. This changed when Megatron attacked the Constructicons with his Robo-Smasher, effectively reprogramming them into Decepticons.

In 1984, Mixmaster and the Constructicons were stationed on Earth, where Megatron claimed to have built them. (On the MUX, this refers to him rebuilding them in their current Earth forms.) One of their first missions was to sabotage the Autobot computer Teletraan I while the Autobots were distracted, and Mixmaster helped by mixing up an acid strong enough to melt through solid rock and the floor of Autobot headquarters. Ultimately they were driven back by the Dinobots and despite forming the mighty Devastator, they were knocked into a river of lava.

The Constructicons survived and continued to work with Megatron during his various schemes. During one such scheme, namely the reconstruction of New York City into "New Cybertron," Mixmaster repeated himself a lot ("Auto-auto-autobots!"). This never happened again, but everyone assumes it was his standard vocal quirk anyway.

Mixmaster and the Constructicons went on to build the Transfixatron and an Autobot-eating machine, but were eventually defeated by the former.

Next on the agenda was drilling a hole to Earth's core so that Megatron could drain its energy. During this project, the Constructicons got dominator discs snuck onto them, with Mixmaster and Long Haul getting theirs from Mirage and his gun. This allowed the Autobots to control Devastator and use him against the Decepticons, although this scheme eventually broke down.

Some time afterwards, the Constructicons helped the Autobots Grapple and Hoist build a solar tower, only to trap them inside the structure and hand it over to Megatron as soon as it was done.

Mixmaster and company later took care of a space bridge shipment of Cybertonium from Cybertron.

Following that, they went into space to mine minerals from an asteroid. Omega Supreme, miffed about the Constructicons going evil and wrecking Crystal City back in the day, attacked and nearly killed them. Luckily for Mixmaster, the giant Autobot had to leave to deal with some kind of alien that had lived inside the asteroid, and the Constructicons escaped termination.

They were defeated by the newborn Bruticus.

In 2005, Bonecrusher and Mixmaster attacked a baseball stadium in Texas, only to be driven off by Windstorm and two Junkions.

In October of 2012, Mixmaster was called in investigate a "Mysterious Goo" encountered by Scourge and Starscream's forces in the field. After coming in contact with the goo itself, Mixmaster began to act strangely... which, because it's Mixmaster, went largely unnoticed.

Mixmaster returned to Polyhex to "recruit" more followers for the Dweller, only to be subdued and cured by Starscream. In return, Mixmaster promised the help of Devastator against the Dweller.

May 17 - The Proving Grounds

Mixmaster, alchemist of the Constructicons, appears on screen. "Fellow engineers, I'd like to present to you the Proving Grounds of Tarn." He gestures to the workshop, the camera pans slowly around, then jerks suddenly. In the reflective sheen, Bonecrusher is seen holding the camera. "Given some of the tasks that have been issued to our operations, this workshop will craft our very best in designs and creativity. All of the interior walls are built with a hardsilver-duracrete composite to neutralize static, radiation contamination, and even plasma energy. The fabricator drum system over here is based off of my own design, has raw materials to create up to six thousand, eight hundred transitive and non-transitive alloys or pure metals. From there, the processing stations can construct base plates using those elements, which you can put together. Its totally modifyable and replacable, which is good for test runs. Any object or system that passes the proving grounds could get redesigned into an actual feature of the Empire, and maybe if you're lucky, you'll get some credit out of it." He motions up to a wall. The camera does not move. "Get a shot of the tubes. BeeCee." The camera moves upwards. "Eight different exposure arrays, able to provide armorcoatings, spray hazardous materials remotely, or disinfect and sterilize any experimental system. Speaking of..." He motions to a control panel. "For those of you amateur creative geniuses, the control panel is keyed into your faction badge. You can subspace up to fifty different projects of your own design, for work at a later time. Now, there's a tag system in place if you want one of us to look at your design, but unless its something really novel and new, you can keep your junk to yourself. So yeah, check it out."

The Decepticons go raiding for Nucleon.

Mixmaster slouches over a bar, which is clearly Encore's place that is DEFINITELY FORBIDDEN. He's got a drink in hand, and slowly slouches to look at the holovid camera. "Soundwave's slagged. metaphorically anyway" He muses, obviously taking his time. "The nucleosis got him. He's all froze up, and he's stuck in Harmonex."

Mixmaster finishes his drink, "Now...this is NOT my delegation, but it seems to me, we can't have our chief spook sitting out there...all alone...in a neutral city...with all of our plans..." Mixmaster raises a finger and points to his head, "in his head."

He takes another drink, finishing it "Seems to me, we'd better get someone who can bypass that forcefield, otherwise Devastator's going to have to do the job. Drop him off at the Proving Grounds in Tarn when you get him."

He then ignores the camera, which eventually shuts off as a minute passes where he just orders another drink and eats some of the nuts and bolts from a bowl.

Mixmaster appears on screen, "The Constructicons have finished a new primary engineering lab in Tarn, and have several work orders put in for Polyhex." The mech rubs his hands together, "Can't wait to get into that one! Scrapper has..../ideas/. Hehahahahaha! Anyway, on a personal note, progress is slow on the Nucleosis front. I've got my own ideas, but since we're down chem-science majors at the moment."

He holds out his hands like he's carrying something, "I say we build one! We get some extra hands involved, maybe for raiding or design or whatever, and Scrapper and I will figure out the rest. Might require someone's processor, but what the hey."

The Fallen TP Finale -- the big bad himself shows up looking for his Blaster.

Mixmaster appears on screen over at the Proving Grounds, he laughs heartily, "You got nothing to worry about. I've been to Earth, its good stock to loot from sure, but the inhabitants are tiny and squishy." Scrapper appears behind Mixmaster and denotes, "Human germs!" in a disgusted tone. Mixmaster continues, "Pretty much. They're not a threat, not by a long shot."

They're a goon squad, nothing more. More fodder-tier organic 'life', and barely that. Their stuff barely even blows up well.

Mixmaster appears on screen, with the rest of the Constructicons behind him. "Alright so, we've done our preliminary testing on this Dark Nebula. This thing's a doozy. Now we mentioned that we're going to either need to confiscate or build something with a lot more power, BUT it can be done."

"We're dealing with a lot of spatial condensation, its not too different than what we use for sub-space, and mass-shifting. Scrapper was really focusing on that idea, and we've made good headway. Problem is that there's a real....I guess the proper thing to call it is a 'one way intrusional barrier' there. You can shove things in, but they don't come back out. I've fabricated the best cables known to construction, and they sever like silk cords. Its a powerful weapon." Scrapper and Hook look over to Mixmaster and say something that isn't picked up. Mixmaster nods, "Right right, so Hook, Hook, he says 'Well if its like subspace, why don't we use it like subspace?' And Scrapper he gets to thinking, and the idea is that we drop a few thousand subspace drones into the Nebula. We program them to form a large sphere shape in there...and then with a massive energy beam transmitted into the thing...we get it to just INVERT!" Mixmaster cackles as he gestures, his hands unfolding. "HAAHAHAHAAA! We literally turn it inside out. Probably going to be really dangerous to anyone just outside of that thing when it pops, but thats for the Science division to figure out."

All we need now is a transmission source that has the power to beam pure energy that far, we'll take care of the drones.

Mixmaster appears on screen, looking annoyed. "So Starscream...we're uh uh uh expecting giant gold statues are needing made now, so why don't you just tell us what we need to tear down so we can get a head start on that."