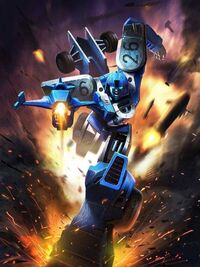 Mirage is not thrilled about being with a bunch of rough-and-tumble freedom fighters like the Autobots. If he had a choice he'd be in Monte Carlo, or better yet, back on his beloved Cybertron hunting turbofoxes with his high-priced friends. Autobot leader Optimus Prime must constantly cajole him into continuing his service with the Autobots, but he feels it may be a losing battle. Despite his coolness to the cause, Mirage is a surprisingly effective and deadly fighter and an even more effective intelligence gatherer, which is the role he much prefers.

Mirage carries a rear-mounted electro-disruptor which is able to interfere with the circuitry of an opponent by casting discrete packets of electrical charges them. Hence, he never is situated where he seems to be when it is in use, and can even use the disruptor to give himself the illusion of a different physical appearance, which he can sustain for up to six minutes. All of this contributes to his effectiveness as an intelligence agent. He can also hit a screw-head dead center from 200 yards with his armor-piercing hunting rifle. It shoots liquid-fuel-powered darts.

He's unsure of the Autobots and their cause, and consequently cannot always be fully trusted. Optimus Prime is well aware of his coolness to the group, but considers him too valuable to let go.

Mirage was part of the bridge crew of the Ark when it crash-landed on Earth four million years ago. A volcanic eruption in 1984 awakened the Ark's inhabitants, including Mirage, who was reformatted by Teletraan I to have a terrestrial alternate mode of a F-1 Ligier JS-11 Formula-1 racer. With the battle against the Decepticons now transplanted to Earth, Mirage still hated warfare. He longed to return to Cybertron and simply turn his back to the evil Decepticons, but his loyalty to Optimus Prime kept him in the fight.

Mirage was instrumental in stopping the Decepticons from returning to Cybertron after amassing enough energon from Earth. The Decepticons had constructed a new star cruiser and were in the process of flying home to tip the scales of the war in their favor. Mirage used his cloaking ability to sneak aboard the Decepticon ship. He uncloaked and opened fire, blasting away at the ship's controls. He then bailed from the doomed cruiser, floating back to Earth's surface on a parasail as the Decepticons crashed into the ocean. Optimus Prime asked Mirage why he -- homesick and war-weary Autobot that he was -- did not hitch the ride back home. Mirage responded, affirming his loyalty to the Autobots, "The ship was... full."

Mirage’s role in the Autobots’ battles on Earth was a distinctly minimal one, leaving him confined to the background on the battlefield or not present at all. In early 1985, however, the spotlight shone on Mirage again when Cliffjumper suspected him of disloyalty. The discovery of a Decepticon installation in a sector Mirage had recently scouted caused Cliffjumper to leap the incorrect conclusion that Mirage had concealed the information and was a traitor to the Autobots. During a battle with the Decepticons at the site, Mirage was injured, but managed to rip a Decepticon seal off Skywarp. Mirage risked the trust of his comrades by sneaking away to perform a plan of his own, framing the Decepticons for stealing Energon cubes from the Insecticons.

Spotted carrying the cubes by Cliffjumper, Mirage’s guilt seemed all but confirmed, and before he could reveal his innocence, he was captured and brainwashed by one of Bombshell’s mind-controlling cerebro-shells. Under Bombshell’s control, Mirage led the Autobots into an ambush, but at the battle’s end, the assorted manipulations were revealed and Cliffjumper apologized to Mirage.

Toward the end of the year, Mirage was among the team of five Autobots who disguised themselves as the Stunticons, with Mirage’s alternate mode making him the perfect choice to masquerade as Drag Strip. Penetrating the Decepticon camp, the Autobots ran into trouble when the real ones arrived, trying to prove their identities by forming Menasor. With a combination of Windcharger’s magnetic powers and Mirage’s illusion-creating ability, the Autobots were able to appear as Menasor too. Though the deception was soon revealed, they were still able to thwart the Decepticons’ plans.

During a battle between the Autobots and the Decepticons, Mirage destroyed a Decepticon Space Bridge as it was powering up, ripping a hole in time and setting off the Timewarp TP.

No one knows his current activities or whereabouts.

Skyfall by Adele ♬
"A storm's coming."
You Know My Name by Chris Cornell ♬
"Mirage. Justa Mirage."
Friction by Imagine Dragons ♬
"Your mission, if you choose to accept it..."

As of 2014 Mirage is played by Dexter Douglas.