View source
watch 01:25
Jurassic World: Dominion Dominates Fandom Wikis - The Loop
Do you like this video?
Play Sound
The name or term Metroplex refers to more than one character or idea. For a list of other meanings, see Metroplex (disambiguation). 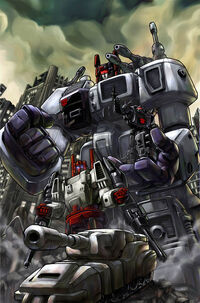 Possessed of startling versatility and staggering strength, METROPLEX is the robot the Autobots depend on when all other options are exhausted. In battle, he is a mighty instrument of titanic destructive force, unwavering and ever valiant in his attack. Metroplex suffers from extreme modesty, despite is enormous power. In fact, he often berates himself for not being able to contribute more to the Autobot cause, something his fellow Autobots often have trouble understanding. In robot mode, Metroplex has enormous strength; he can lift 70,000 tons. To scratch is armor would require at least a low-yield nuclear explosion. Mounted on his left shoulder are twin high-energy maser cannons (microwave amplification by stimulated emission of radiation), and a retractable omni-directional long-range transmitter on his right shoulder. In Autobot City mode, he has a helipad as well as numerous storage and repair bays, allowing him to service up to four vehicles at any one time. His left rear tower transforms into a tank called Slammer, whom he can control for a maximum range of 40 miles. Slammer's cannon shoots explosive rocket-propelled mortar shells that have a 1.5-mile range. In addition to Slammer, Metroplex houses two other robots that are permanently mind-linked to him though they often operate independently, Scamper and Six-Gun. Metroplex's final mode, the mobile battle station, is a wheeled platform capable of firing up to 12 different pieces of artillery blazing away simultaneously. In addition to the maser cannons, he is armed with Six-Gun's pulse rifles and missile launchers, twin independently mounted disruptor rays capable of interfering with electrical currents within a target's body, two laser lances, and two front-mounted antimatter projectors, the most powerful of all his weapons. They are capable of producing and firing minute packets of antimatter that obliterate anything upon contact. Metroplex can also use all these weapons and more as the Autobots' roving mobile battle station.

Metroplex was a massive, mythical warrior who gave his last energon to power the Ark before its fateful mission. Believed lost, the original Metroplex's core was recovered by Alpha Trion and saved for a time when he could one day be rebuilt.

In 1986, Autobots began construction of Autobot City. Completed within the year, the city was originally run by Teletraan II, which was expanded and given new life with the core of Metroplex, named for the lost Titan of old. Autobot City was originally located near Lookout Mountain, in the Alabama, Georgia, and Tennessee tri-state area.

In 2014, Metroplex was infected by the Arkeville virus, and Autobot City was taken over by the Decepticons.

In 2018, Metroplex made a short jaunt to Cybertron to recover his new cityspeaker, Windblade, from the Decepticons.

Autobot City has been moved several times. It is currently located in the Nevada Desert, away from human settlements, where it collects geothermal and solar energy to limit the Autobots' reliance on fossil fuels. However, Optimus Prime has considered moving it back to Lookout Mountain so the Autobots can have a more centrally-located base of operations.

In December of 2009, Red Alert was made Director of day-to-day security at Autobot City, where he was deeply unpopular. He reported to Metroplex directly with any security problems, which in Red's mind were many.

When Autobot command, communications, and security specialists are outside the city, Metroplex easily takes over each of these roles without complaint. Metroplex is a high-ranking Autobot, but quiet, usually leaving command to others unless called upon in a crisis.

In 2013, when Buzzsaw came by Autobot City to gather information on the closing of the Shattered Glass rifts, Metroplex sent Scamper out to meet him. Metroplex gave Buzzsaw useful information about the known rifts in the southwestern US and in Siberia near Decepticon City, but failed to mention the third remaining rift within Autobot City himself.

In 2014 Metroplex was infected by the Arkvelle virus, and fell under Decepticon control. Ghost possessed his automatic systems, taking control of the entire city. In November of that year he was finally freed of the virus's effects and Ghost's possession, but what lingering effects Metroplex will face from the ordeal are not yet fully understood.

In 2017 Metroplex was badly damaged during an attack on Autobot City, rendering him unable to communicate except through the Cityspeaker Windblade.

On the MUX, Scamper, Six-Gun and Slammer are additionally assisted by Cog and Lugnut.

<Text Report. Coded for COC Only.> Elita One has brought up an interesting point: my feelings on the proposed move. To be honest, I hadn't thought about it much before Commander One brought it to my attention. Since I came online, I've yet to see much of this planet firsthand, aside from the surroundings of where I'm stationed. I would very much like to see the desert... it looks so beautiful in reconnaissance feeds. As for Kup's suggestions about opening my walls to civilians... I've always enjoyed Carly and Spike's visited with their son, Daniel, and I rather like the idea of being able to provide humans with pleasure and enjoyment when they visit. However, I understand my duties as a defense base come before any personal feelings, and I understand if such expansions would have to be put off or located elsewhere. I thank Kup for trying to expand my experiences, and Elita One for trying to ensure my feelings were taken into account. As always, I live to serve the Autobot Cause, and will be perfectly content to whatever and however I'm stationed. 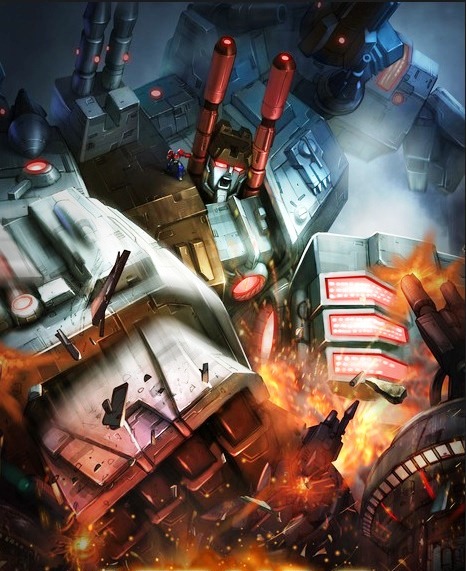