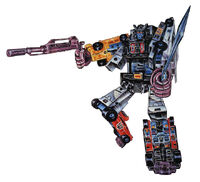 A clanking, crushing terror that destroys all in his path, MENASOR is the ultimate Decepticon weapon - or, in theory at least, should be. For underneath his thick-plated hide is a mind wracked by indecision and conflict. All his actions are the hard-fought results of this ongoing internal struggle. Menasor is designed to mesh the thoughts of his five Stunticon components - Motormaster, Dead End, Breakdown, Drag Strip, and Wildrider - into one single-minded destruction machine. But Motormaster is so thoroughly loathed by the other four that a mental rift develops within Menasor, giving him a violently unstable personality. Although he strives to perform his lethal duties, Menasor is sometimes too confused to do anything but haphazardly lash out at anything near him. At these times his hands reach for his head as he strains to clear his thoughts. Like a child throwing a tantrum, he is at his most uncontrollable in this state - and also his most dangerous.

Menasor has tremendous strength - he can punch with a force of 140 tons. His armor is nearly impervious to all but the most powerful artillery. He uses Motormaster's cyclone gun to blow through Autobot barriers and carries a silver sword to slice through whatever's left.

Menasor's split personality is often a severe handicap to his successful operation. His lumbering, slow gait makes him an easy target - but he's still a tough nut to crack.

Menasor was formed for the first time to counter the new Autobot team, the Aerialbots, only to face their combined form of Superion. Menasor's sheer aggression drove the Autobot combiner back until he was trapped, only to have victory slip out of his grasp when a newly repaired Omega Supreme helped Superion defeat the Decepticon.

When the treacherous Starscream rampaged with his new army, Megatron requested the assistance of the Stunticons, only to be rebuffed by Drag Strip. Later, Bruticus defeated Devastator, and Starscream's victory seemed imminent when the Stunticons finally turned up. At first, the rowdy bunch of cars did not care if Megatron was destroyed, but they realized Starscream would not simply stop at eliminating his former leader. Quickly, they formed Menasor, who dispatched Bruticus with one mighty punch.

The Stunticons were captured by the Autobots at one point and to add insult to injury, they actually masqueraded as Menasor. Something that brought a lot of confusion to everyone, even Menasor himself.

Menasor has remained a menace (pun intended) on the MUX.

As a gestalt, Menasor is controlled by the Stunticons' players.

Menasor was built to manace the evil Autobots, but with Motormaster stuck on Earth and the rest of the Stunticons on Cybertron, he is currently unable to form and protect the innocent.