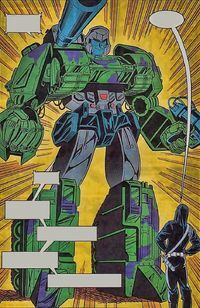 When the Ark was discovered by G.I. Joe in 1982, they didn't understand the difference between the Autobot and Decepticon sigils, and therefore had no way of distinguishing good from evil Transformers. Therefore they rebuilt Megatron as a G.I. Joe tank, unmindful of the evil they would unleash upon the world. Megatron quickly built an undersea base and has made many attempts to take over the world, stopped only by Hawk and G.I. Joe, with the help of the Autobots that G.I. Joe have managed to save.