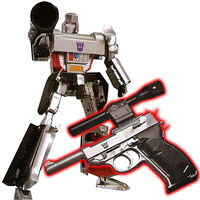 In Cobra World Cobra Commander carries a mode-locked Megatron as his personal firearm.