This page is for the Apocalypse World version of Megatron. For other Megatrons, see Megatron (disambiguation). 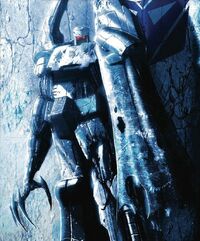 It is the end of the war. MEGATRON looks back at the eons of conflict with little more than disgust. He feels Optimus Prime has ruined everything -- Megatron's plans for domination, his troops -- even Cybertron itself. His lifetime of anger drained away, Megatron looks grimly towards the final conclusion of the conflict, realizing the only resolution will likely mean the deaths of both Prime and himself. At this point, he almost welcomes the reprieve of oblivion. Until then, he stays alive only to remain a symbol for his troops.

Megatron remains an imposing, powerful figure even with the loss of his legendary fusion cannon.  Crimson optics stare from his silver helmet, the expression of his gunmetal-grey face a mix of anger and resignation.  His silver armor is battered and scratched – the ghost of a purple Decepticon sigil barely visible in the center of his broad and dented chest.   His right arm ends in long, clawed fingers – the left, hidden behind a long tattered blue cloak, is rumored to be truncated at the elbow.  Strong black, red, and silver legs hold the Decepticon leader standing for now, which may be a surprise with all that has happened.

4 million years later, the Decepticons arose, and unfortunately for them, so did the Autobots. Megatron wasted no time beginning his energy raids on Earth, threatening the human race in the process. The Autobots swore not to let this happen, and the war resumed, with Earth as the new battleground. It rages to this day, and Megatron continues to seek the conquest of Earth and its energy so that he can return to Cybertron to complete its conquest, and with two planets under his thumb, the rest of the galaxy.

Along the way, he has not only been faced with opposition from the Autobots, but from G.I. Joe, the United States' top military organization. Because of these, he has often allied himself with Cobra, a group that seeks conquest of the Earth, to deal with them. Perhaps they realize it, perhaps they don't, but Megatron wants Earth for himself, and it can be assured that Cobra is not going to have a place in it. But for a while, if he could use them to meet his goal, then they were a tool like any other in his optics. However, eventually the clash between the egos of Cobra Commander led to the dissolution of the alliance, and Cobra actively worked against the Decepticons during the Great Flood of 2011.

In 2011, Megatron melted the icecaps and flooded the world. Ultimately a combined force of Autobots, Cobra, and G.I. Joe destroyed the Decepticon installations at the North and South Poles, restoring the Earth's climate.

In July of 2012 Megatron disappeared for several months, during which Starscream took over the Decepticons. Nemesis began construction of a Galvatron clone to inhabit in case he needed to take over the Decepticons. However, Megatron's return in 2013 made this contingency plan unnecessary. In the wake of the Quintesson invasion and the return of Shockwave, Megatron restored Cyclonus as Intel Commander and arrested Starscream in his place, naming Illarion the new Decepticon Air Commander. Megatron also named Shockwave to AI leader, Military Operations Commander, and Guardian of Cybertron.

After Megatron recovered from his battle with Optimus Prime, he traveled to the Canadian base of the Cult of Galvatron to investigate the situation personally. In June he led a successful energy raid against Niagara Falls, and a mission to liberate nuclear fuel rods from the Bruce Power Station in Canada.

In July Megatron did battle with the Cult of Galvatron, personally killing cult leader Obsidian and dealing the final blow that toppled Super Galvatron. However, in August Megatron contracted the Arkeville virus, trapping him in his handgun mode, and subsequently disappeared, leaving Illarion in charge of the Decepticons.

In 2014, Megatron and Nemesis hatched a plan to use the clone to draw out the remains of the Cult of Galvatron, as well as test the loyalty of Megatron's troops. During a staged fight, the clone of Galvatron destroyed a clone of Megatron, claiming new leadership of the Decepticons. However, the Decepticons united under Starscream to oppose "Galvatron", and vowed to bring Megatron back to life. Starscream made good on his claim, building a new Megatron and seemingly bringing it to life. Megatron switched places with this "New Megatron," assuming command of the Decepticons once more.

In 2015, "Galvatron" and Megatron met in battle in the skies over Polyhex. "Galvatron" was killed, but not before activating a beam that reformed Polyhex into an alien city reminiscent of Unicron.

After Megatron killed "Galvatron," Knightmare ventured to New Polyhex, and challenged Megatron, claiming that his "death" at "Galvatron"'s hands had disproven his immortal power. The two battled, and Knightmare was able to get the upper hand before Starscream intervened on Megatron's behalf. Enraged by Starscream's interference, Knightmare called the other Dominicons to her and formed Dominicus for the first time. Determined to reassert his power, Megatron transformed into pistol mode and blew the new combiner apart. Knightmare and the other Dominicons were captured and brought in for repairs, but Knightmare remained seething with rage at both Megatron and Starscream. The Dominicons subsequently escaped and struck off on their own, turning their backs on the Decepticons forever.

In 2016, when Cybertron threatened to tear itself apart, Megatron revealed himself and ordered Cybertron's civilians not to flee the doomed planet. Megatron then discussed with Shockwave and Starscream the possibility of obtaining information from Vector Sigma about how best to save Cybertron. Shockwave expressed curiosity, wishing to gather more data in able to make better decisions. Starscream advised caution, citing warnings given by Vector Sigma last time Starscream sought its help. As usual, Megatron ignored Starscream's warnings and vowed to move ahead with his plans.

In 2017, Megatron met Nemesis in a cavern beneath Kalis, where together they plotted to finish an old plan of Megatron's that was started but abandoned -- the construction of giant fusion reactor and massive propulsion engines to move Cybertron towards a dying star, thus fulfilling part of Vector Sigma's prophesy. Nemesis vowed to complete the project at once with the assistance of the Constructicons. Megatron successfully moved Cybertron, and threatened Optimus Prime with Cybertron's existence if he didn't surrender. Optimus Prime called him out to the battlefield, and Megatron joined him. Prime then defeated him in combat, leaving him to be brought back to Tarn by DreadTread and Rainmaker.

MEGATRON too survives at the end of all things, ever a proponent for conquest and tyranny, his dark heart still beats. Having fallen from glory, Megatron has been abandoned by the Decepticons, as the faction disintegrated around him. MEGATRON sees the world around him having turned to ash, and recognizes his own part in the conflict...which is why he is determined to reforge the entire species' legacy by his own hands. Leading now a small motley group of Ravagers, he preaches to them of dreams of a myth beyond dreams.