View source
watch 01:25
Jurassic World: Dominion Dominates Fandom Wikis - The Loop
Do you like this video?
Play Sound
The name or term Megan Witwicky refers to more than one character or idea. For a list of other meanings, see Megan Witwicky (disambiguation). 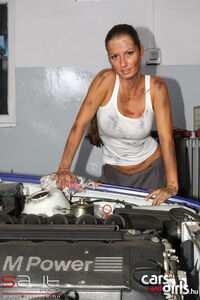 Megan Witwicky was the second child of Carly and Spike Witwicky. She was a top mechanic specializing in antique combustion engine vehicles. She was very intelligent and inquisitive, and has a real ear for music.

Megan started out much like her brother, Daniel - both were inquisitive, intelligent, and enamored by the opportunity of living with the Autobots. However, as Megan became a teenager, she became more and more fascinated by human-engineered vehicles. She enrolled in a mechanical engineering program, much to the delight of her mother. But taking on her dad's bad habit, she became more disillusioned with college, and eventually dropped out to pursue her love for vehicles full-time.

She initially used her family's connections with Jumal, and she began repairing higher-end vehicles. Her talents eventually got her noticed by the Cahnay family, even though working for the family was a nightmare, given the elder Canhay's reputation for being impossible to work for. Nevertheless, after paying her dues, Megan became one of the most respected mechanics in the Saudi Arabian racing circuit. Her lifestyle choice led to repeated clashes with her mother, who still held out hope she was going to follow in a more established and stable profession.

Megan eventually married and had one child. While she remained friends with the Autobots, she made it a mission to deliberately disassociate her alliance, hoping that her skills would be good enough to establish her reputation. Megan died 2095 of natural causes.

On May 26, 2013, Megan was rummaging between couch cushions when she located a slimy, moldy, roach-infested pizza slice and promptly stuck it in her mouth. When Spike and Carly investigated further, they located an entire pizza that Buster had forgotten about, still in the takeout box, with a large colony of roaches settled on top of it. Carly is absolutely livid at the discovery, and wants to confront Buster directly. After a heated discussion with Spike, Carly then realizes that her husband is trying hard to preserve the fragile relationship between the brothers, and it probably wouldn't do much good to scream at Buster, anyhow. Even so, the entire event has soured Carly's already low opinion of Buster.

On April 7, 2014, Megan attended the handfasting of Buster Witwicky to Jesse Macchio.

Since the bombing of Autobot City in 2015 that left several Autobot leaders badly injured, DJ Faireborn has been helping babysit Megan.

Megan grew up in Autobot City, but the moment she turned 18, she rarely came back.

Megan and Carly's relationship has always been complex. Coming from Carly's own background, and Megan's initial 'off the chart' testing - she was all but ordained to be in engineering school. Then, much like her dad - she fell in love with cars. And couldn't kick the bug. And eventually dropped out of college and enrolled in tech schools - and apprenticeships. Now, her mechanic abilities rival that of her late grandfather and now - late father.

Megan Witwicky is usually @emitted by SpikeWitwicky and Doomflower as necessary.