Transformers Universe MUX
Register
Don't have an account?
Sign In
Advertisement
in: US Army, Article stubs, Available,
and 7 more

This page is for the G.I. Joe Artillery Commander. For the Insecticon, see Barrage. 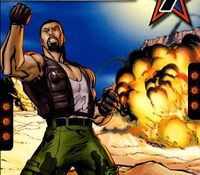 "I don't mind taking a hit or two if it means I can get close enough to a Cobra trooper to wrap my hands around his neck and give a little squeeze."

The G.I. Joe team has seen big, bad-to-the-bone Cobra troopers stumble to a halt when they spot MAJOR BARRAGE steaming toward them on the battlefield. Although in charge of coordinating G.I. Joe's artillery forces, MAJOR BARRAGE isn't above wading into the front lines himself as well. At 6'8" and 300 pounds, this massive mountain of a man can single-handedly mow down a squadron and keep on going without breaking a sweat. He's an ex-collegiate Division 1 wrestler who uses his wrestling skills in close-quarters combat to take down the enemy. However, he'll go with a brute-force smash of his huge fists to get the job done, which us just as effective although less stylish. Intelligent and thoughtful off the battlefield, MAJOR BARRAGE lets his two tech-enhanced shotguns do all the talking in a combat situation. The team is relieved he's on their side, since his fast temper and faster fists are legendary.

MAJOR BARRAGE joined the Joes in 2005.

MAJOR BARRAGE remains a reserve member of G.I. Joe, and is available for mission and physical fitness training when needed.

Major Barrage is available for application.