View source
The name or term Lugnut refers to more than one character or idea. For a list of other meanings, see Lugnut (disambiguation). 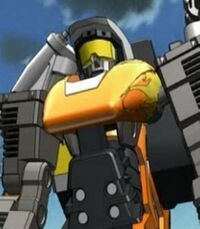 In the Shattered Glass universe, Lugnut was a polite, hard-working mech, who worked tirelessly to rebuild Emperor Prime after Prime's devastating loss to his positive-polarity counterpart. For his trouble Lugnut was rewarded with a chainsaw to the head during one of Prime's rages.