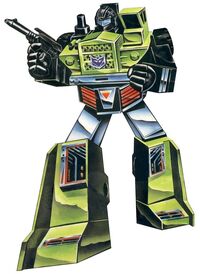 The problem, as Long Haul sees it, is that he gets all the work and very little of the excitement and the glory that goes with being a Decepticon. He knows his job is important; he'd just much rather be on the front lines fighting shoulder to shoulder with fellow warriors than moving supplies and building installations to make sure those warriors continue fighting. Long Haul usually keeps these secret desires to himself though, as he's smart enough to know Megatron is not likely to be sympathetic and has no patience for grunts who question their orders.

In haul truck mode, Long Haul can carry up to 90 tons for 1200 miles at a top loaded speed of 40 mph. He can also add on a dual heat-seeking missile launcher. In robot mode he carries a laser pistol. When combined with his fellow Constructicons, he serves as the torso module in the giant robot known as Devastator.

Long Haul is slow and sometimes his unhappiness reduces his effectiveness. He's sensitive to teasing about the mundane nature of his job and can often be goaded into fights in which he may be clearly overmatched.

Roughly nine million years ago, Long Haul and the Constructicons were friends of Omega Supreme in Crystal City on Cybertron. Their engineering skills were permanently turned to evil, however, once Megatron and the Robo-Smasher reprogrammed them into Decepticons. They were also given the combined form of Devastator, making them the physical equal of Omega Supreme in combat. After they destroyed Crystal City at Megatron's command, the Constructicons earned the everlasting ire of their former friend.

Long Haul was eventually summoned to Earth and re-built by Megatron and the Decepticons, and joined them in trying to destroy Optimus Prime and the Autobots. Their first scheme was to supercharge Megatron with the power chip rectifiers of his fellow 'Cons, so that he could defeat Prime in personal combat.

Though they failed, the Constructicons would be involved in many of Megatron's schemes from then on, such as constructing of "New Cybertron" in Manhattan, where Long Haul got to carry around debris and paralyzed Autobot leaders.

Long Haul was the most long-suffering members of the Constructicons, possibly even more so than Scavenger. He was constantly complaining about wanting a greater role in the group, either as a warrior or an engineer, but was inevitably relegated to "go fetch" work for Hook or Scrapper. It didn't help his mood any. At one point the Constructicons later built the Transfixatron to paralyze the Autobots in their vehicle modes, along with a metal-munching machine to devour them. Long Haul complained loudly about his job, but was cheered up when he got to feed Ironhide to the machine. He didn't even mind when the Autobots got loose, since it meant finally getting some action.

Megatron later had the Constructicons build a giant drill, planning to collect energy from the Earth's core. When an accident was caused by Scavenger's faulty sensors, Long Haul was tasked with loading Mixmaster's mixing drum full of chemicals so that the crazed chemist could do a quick repair job. He didn't enjoy it one bit. A group of Autobots soon discovered the Decepticons, only to be chased off by Devastator. However, they soon returned with a plan—using dominator discs to take control of Devastator for their own needs. The Autobot Mirage shot a pair of discs at Long Haul and Mixmaster when they weren't looking, and as soon as the Constructicons formed Devastator shortly afterwards, the Autobots took control of him. Megatron's attempts at regaining his troops eventually led to Devastator going crazy and wrecking the controls to the drill, so Long Haul had to help stop it from breaching the Earth's core and shattering the planet.

When the other Decepticons were suffering from Cybertonium depletion, Long Haul and the other Constructicons unloaded a shipment of Cybertonium sent by Shockwave. They failed to stop the Dinobots from using the space bridge to go to Cybertron.

When the Constructicons deceived Grapple and Hoist into building a solar tower for them to take over, Long Haul thought he was finally going to get to build something. Hook sent him to carry solar panels around.

Long Haul's greatest claim to fame was abandoning his job of guarding the recently discovered pool of electrum, forcing Dirge to do it by himself. Dirge was then promptly beaten up by Seaspray, and the Autobots gained control of the electrum. Oops.

Long Haul later went into space with the other Constructions in order to mine energy from an asteroid. When the Autobots found out, the Constructicons found themselves facing their old pal, Omega Supreme, who broke the entire asteroid in half in his attempts to exterminate Long Haul and the others. Ignoring the strange alien that "hatched" from the asteroid, the Constructicons merged into Devastator and kept fighting Omega Supreme on Earth, but were eventually defeated. Before Omega Supreme could finish them off, however, he had to leave and deal with the alien.

Long Haul remains with the Constructicons on Earth. In 2012, he was called to Cybertron to help combat the Dweller.

In 2016, he took part in an attack on the Three Gorges Dam in China.

Long Haul was once played by Swiftpaw. He is available for application. In the meantime he is temped by Bzero.