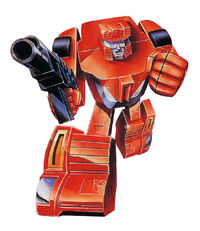 Looking in from the outside, you'd think Lightspeed had it all: He's highly intelligent, strong, fast, and considered dashingly good-looking by Transformers standards. And if any of that mattered to him at all, he'd be golden. Sadly, Lightspeed aches down to the core of his being for something more. His heart yearns to escape the bonds of gravity and fly free. Dreams of soaring between the stars and exploring the vast mysteries of space consume him, making him feel slow, trapped, and dissatisfied with what others would see as a charmed existence. Lightspeed would gladly pursue his dream of being rebuilt as an interstellar spacecraft if the Autobots' situation wasn't so grim. As it is, he knows the necessary resources are more valuable elsewhere and so puts his energy into winning the war and making his dream a possibility. Unfortunately, His dreams tend to distract him from his current function as a data processor.

In jet car mode, he can go from 0 to 500mph in 8 seconds, and His Cruising speed is 300mph. He has twin infra-red scope missile launchers. In robot mode he has a blinding light-burst gun with a magnetic sight that locks onto iron-bearing targets, such as most enemy Decepticons. Lightspeed combines with his fellow Technobots to form Computron.

Lightspeed is allergic to energon (and most other fuels to a lesser extent) and must take a special lead sulfide additive when fueling or he experiences severe engine knocking and a bad rust rash.

Lightspeed and the Technobots were part of a team that ran guerrilla missions against Shockwave on Cybertron during the four millions years that Megatron and Optimus Prime were missing, and deactivated on Earth.

Lightspeed and the Technobots continue to patrol Cybertron unless called to Earth by Optimus Prime. In 2012 they went on a secret mission for Alpha Trion. After the Dweller was destroyed, the Technobots spent months down in the tunnels below Kalis, mopping up most of the remaining Trans-Organics. In 2014, Scattershot returned to Earth to lead an assault against Decepticon-controlled Autobot City. Afterburner, Lightspeed, and Strafe went instead through the space bridge into Autobot City itself. There they met up with Sandstorm and Steeljaw, and helped deliver the cure to Teletraan II, freeing Metroplex.

Lightspeed is available for application. In the meantime he is temped by Bzero.