View source
The name or term Flagg refers to more than one character or idea. For a list of other meanings, see Flagg (disambiguation).

This article is about the original commander of the Joe Team - for his son who succeeded his name, see James Flagg III]]. 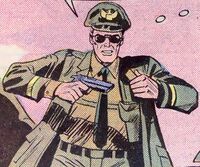 General Flagg was an honorable and hardworking man, doing his best to excel to the extent that he was the best there was at what he did, seconded only by Hawk himself. His 'bag of dirty tricks' was legendary, yet he wouldn't go as far as puttting innocent lives at risk to succeed.

General Flagg came from a lengthy line of soldiers. Early in his career, his skilled marksmanship earned him the position of captain of the Army pistol team. In the late 1970s, Flagg saw the need to combat terrorist threats at home and abroad. To do so, under the direction of General Colton he created Special Counter-Terrorist Group Delta, and code-named it "G.I. Joe," after the legendary team of soldiers from the 1960s. Even as Flagg created the team, the terrorist organization known as Cobra Command was rising in power. Flagg placed Colonel Clayton Abernathy, code-named "Hawk," in direct field command of the team. While Hawk reported to Flagg, Flagg reported to General Austin. Austin did his best to protect Flagg and the Joes from his superiors, the politically minded committee of generals known as "The Jugglers."

Flagg's strength lay in his ability to know personnel and who was the right person for the job. Hawk became his first choice when Flagg saw him court-martialed after he accepted responsibility for the beating of a terrorist suspect to get information needed to prevent a bombing that could have killed several children. Though a sergeant serving under Hawk had been the one interrogating the terrorist, Hawk was not willing to place the blame entirely on him. Hawk's superiors were angered by the decision, but Flagg was impressed with Hawk's principles. When the general in direct command above Hawk hired mercenaries to kill the young colonel, Flagg, and Alessandro "Sparks" Verdi threatened to expose the general if he did not drop the charges against Hawk. Soon after, Flagg appointed Hawk commander of the newly forming G.I. Joe team.

As the original roster of the team was filled, General Flagg trusted Hawk to choose many members of the team. Though Flagg did choose some himself, often relying on the advice of Sparks, who served as the team's liaison within the Pentagon. Flagg personally recruited team member Flash from the Army's Aberdeen Proving Grounds. Flagg was never an arrogant man and was under no delusions about his own abilities. His place was behind a desk making high-level decisions. The military operations and planning for the Joe team rested on Hawk's shoulders, but Flagg was always on hand for support.

Flagg was one of the few people who knew of the Joe team's classified 14th member, sniper Sergeant First Class "Shooter" Craig. After Craig was killed while secretly covering the Joe team's mission to rescue Dr. Adele Burkhart, he personally visited her mother to inform her of her daughter's death. He insisted the rest of the Joe team attended her funeral, at which he spoke, but they never knew why they were there.

On occasion, Flagg was personally involved with the team. When Cobra tried to capture the G.I. Joe Mobat tank at the Armed Forces Day Parade in New York, Flagg nearly captured Cobra Commander, but was unwilling to risk the lives of the innocent people in the crowd. A bullet fired by Cobra Commander grazed Flagg's head, but the wound was minor. When Clutch wondered why Flagg didn't shoot at the Commander, he answered, "...well, that's why we're the good guys."

Months later, General Flagg sent the Joes on a mission into Sierra Gordo which sparked a chase around the world to stop Cobra's plans and find the Cobra courier known as Scar-Face. The Joes took the injured Baroness into The Pit, violating protocol, and Flagg vowed to take full responsibility. When the Cobra found out the location of the G.I. Joe Headquarters and launched a full-scale assault on its HQ. General Flagg was present during the attack.

Flagg took the responsibility of protecting the Baroness whom the Joes had captured during the events of the attack on the Treasury Building. In between the attacks, when Major Sebastien Bludd escaped from Joes, he proceeded to rescue the Baroness from the Joes. He knocked out the Joes who were assigned to watch over him, but General Flagg arrived at that time and dueled with Major Bludd. Bludd in between the duel shot General Flagg fatally in the chest and escaped.

When the assault ended, and Joes were enjoying the reunion of Snake-Eyes and retreat of Cobras they came to know about General Flagg's martyrdom and their joy was short lived Doc tried to revive him but due to the excessive blood loss he died shortly. A brief time later, a ceremony was held, and General Flagg was buried at Arlington National Cemetery. Several months later, a newly constructed aircraft carrier, the U.S.S. Flagg, was named in his honor. The Flagg became the main naval vessel used by the G.I. Joe team.

Flagg was killed by Major Bludd long before the opening of the MUX. Today, Sebastian Bludd remains at large and is still wanted by the government for Flagg's murder.

Although his son's filecard lists his name as James Longstreet Flagg III, "the Third" names don't work like that. For him to be Flagg the Third, he'd need the same first and middle names as his father, Lawrence J. Flagg (who must be Lawrence J. Flagg, Jr.) To maintain the name James and the continuity of the original General Lawrence Flagg, on the MUX both characters are named James Lawrence Flagg (assuming the first General used James or Jack).

Since General Lawrence Flagg is dead, he's not available for application.

In the Joe world universe, General Flagg and Lieutenant General Hawk leads a worldwide peacekeeping force called G.I. Joe. They are assisted by their XO, Brigadier General Flint, who oversees the Ark Project. The Ark Project recovers and rebuilds damaged Autobots into G.I. Joe vehicles. With Optimus Prime as yet unrecoverable, the Autobots on Earth defer to General Hawk.