"Laserbeak" is a heroic Decepticon Mini-Cassette from the "Shattered Glass" universe. For his TFUniverse evil counterpart, see Laserbeak. 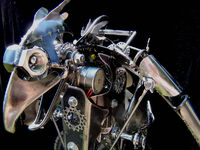 "The only point I will ever like in Autobots is the point of mutual understanding."

Laserbeak is one of Soundwave's heroic Decepticon Mini-Cassettes. He seeks an understanding with the Autobots that will help them end their war, but that doesn't mean he's unwilling to fight on the Decepticons' behalf when called on.

No matter what the odds are, Laserbeak is clearly very brave. He'll fly into danger in a nanosecond if the Decepticons, especially Soundwave, need him. Decepticon Leader Megatron has a special appreciation for Laserbeak's combination of intelligence and loyalty.

In condor mode, Laserbeak can fly at speeds of up to 250 mph with a range of 1500 miles. He has two independently targetable laser cannons which can emit a beam able to pierce 2-inch thick plate steel at a distance of 30 miles. Laserbeak uses these beams like a surgeon uses his scalpels - with extreme precision. He can use them in battle against the Autobots, and does so when necessary, but whenever possible he prefers to fight with words instead of firepower.

In microcassette mode, Laserbeak can record hours of information from successful interrogations. In electric guitar mode, Soundwave can play him to create harmonic music or audio-shattering sonic attacks.

The Autobots are well aware of Laserbeak's bravery and can take advantage of that trait to lead him into traps if they can put his allies in danger. Luckily, Laserbeak has a steady supply of ruby crystals, which empower his lasers. If he gets into a situation over his head, he can usually shoot his way out any situation where smooth words won't get results.

As part of the Mayhem Suppression Squad, Laserbeak responded to a signal sent by Razorclaw, leaping out of Astrotrain while spewing fire at the Autobots Jazz, Grimlock and Goldbug.

Having decided that Optimus Prime's Ark posed too great a threat to the galaxy, the Decepticons resolved to destroy it.

After the Nemesis launch, Megatron and Temperance arrived on Earth later in a shuttle with Rumble and Laserbeak, having escaped Cybertron just before it entered the Plait Expanse.

In September of 2010, Laserbeak was believed killed by the Junkion attack on the Nemesis. However, Laserbeak's core was saved secretly by Aria.

In 2011 the Autobots captured the V'ger, and Laserbeak's core was discovered by Blizzard, who has promised to rebuild Laserbeak's body, at least according to Laserbeak's specs in Blizzard's database. Blizzard rescued the Decepticon interrogator and built it a new body out of scrap and spare parts found aboard the V'ger.

Laserbeak is currently still aboard the V'ger as he adjusts to his new body.