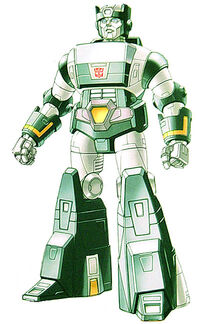 KUP, as in PicKUP Truck, is an old warhorse. He is a grizzled Autobot veteran with ten thousand tall tales from his one thousand adventures and a motto or word of advice for any situation. He is as brave as they come and as loyal, and sometimes as crotchety as a wet hen - especially when Hot Rod's adolescent thoughtlessness propels them into dangerous areas. Kup loves the Dinobots because they love hearing his tales of glory. When he transforms, Kup's vehicular mode is somewhat squarish and "old-fashioned" compared to some of the sleeker, "later model" Autobots, but he has no complaint about that. He sees himself as a seasoned campaigner with much knowledge to impart and he imparts it whether or not anyone has asked for it. He is sort of the Falstaff to Hot Rod's Prince Hal and he likes the role.

In robot mode, Kup carries an old-style musket laser with a five-mile range that shoots bursts of metal-corrosive hydrochloric acid for close-quarters targets. In truck mode, Kup has a maximum speed of 100 mph, but can travel 800 miles without refueling.

Death crystals are very ancient and very dangerous. The First time Kup saw one was on Vandros Seven. He and his team were being pinned down by heavy fire. A couple of the hot headed young bucks decided to charge.. When they did, they each got shot once by something powered by one of these things.. They just.. shattered. Not exploded, not shot.. just shattered into so many pieces you couldn't even make out who they were. Kup’s team was pinned down for two cycles before they figured out how to get around and flank them from the rear. They never gave it a name.. called it what it was.. a death crystal.

After Kup’s initial encounter with them, they tracked their planet of origin to place called Dread - Kup and a small group of others were tasked to work as black ops to infiltrate and gain intel on the death crystals, As well as any means that existed of counteracting or destroying them. They didn't find out anything. In fact, they got captured. Spent so many cycles there they lost count. Imprisoned. Tortured. Repaired, only to be tortured again. Only one shot presented itself for anyone to get off that rock. Kup was voted to go. He was able get out, and get back. The others stayed behind, knowing what was going to happen to them. When Kup got back, high command debriefed him, and summarily disavowed the other mechs that went with him. The last Kup'd heard, they'd erased all references and records to death crystal in all archives. They figured if no one knew about the death crystals, no one would go looking for them, and no one would use them again.

Kup told them it was a bad idea to do that. Pretending like something exists never works, and it doesn't unmake it. Still.. it's one of those things he wished he never knew about.

Kup was stationed in another part of the galaxy while Optimus Prime and Megatron's forces were battling on Earth, but eventually joined up with the Earthbound Autobots when the Decepticons practically took over Cybertron in the early days of the 21st Century. Secret Files of Teletraan II

When on Cybertron, Kup was Ultra Magnus's Head of Security.

In 1999, Kup assumed command of security forces in Autobot City so that Red Alert could return to the Ark.

In December of 2009, Red Alert was again made Director of day-to-day security at Autobot City. Kup returned to Cybertron, where he continues to act as Head of Autobot Security on Cybertron under Elita One, unless summoned to Earth.

In 2014, Alpha Trion and Emirate Xaaron nominated Ironhide and Kup to fill vacant positions on the Council of Autobot Elders.

In 2015, Kup was captured by Scourge and Starscream, and made to deliver their demands that the Autobots turn over Alpha Trion so the Decepticons can use him to resurrect Megatron.

He was part of the crew on the ill-fated maiden voyage of the Spirit of Freedom.

In 2016, Kup, Wheelie, Arcee, Sit-Com, and Phase-Ar travelled to Goo, where they discovered the tracking station had been destroyed by death crystals. The Autobots and Junkions were attacked by Astrotrain, revealing the Decepticons had the crystals now. Kup revealed foreknowledge of the crystals, and explained he’d encountered them before, and had been held prisoner on the source world, Dread. Arcee, Elita One, Kup, Optimus Prime, and Swish travelled to Dread, where they destroyed Megatron's death crystal cannon and freed the Dread Slaves, cutting off the Decepticons' source of death crystals. Kup freed his former team and brought them safely back to Cybertron.

<Kup appears on the screen, standing in the security room on Cybertron. He looks even more age-worn than usual. His gruff voice is colored with shock and sadness as he delivers his report.>

We got some bad news to report up here, Autobots. Our training regiment in the Toxic Sludge Swamps is gone. We got a report from one of the Hazardous Environment Training Squads, stating they thought they spotted a Decepticon movin' through the sludge. A patrol was sent out, but didn't report back. About an hour later, we got a distress call sayin' that a heavily armored mech was slaughterin' everyone in sight. We sent a platoon in as backup, and when they got there... <Kup pauses, shaking his head.> Everyone was gone. The patrol team brought back images, and... I haven't seen a massacre like that since a pack of crazed Ferrovores wiped out a colony on Seledon Six. The platoon searched the area, but they couldn't find any trace of the attackers. All they found was a blurry image taken from a data recorder. <The image on the screen changes to a blur of aquamarine slashing across a field of fuchsia. Above it is a black splotch, but a pair of hideous yellow optics glows within.> Somethin' nasty hit us up here. I'm callin' back all training regiments and doubling up on patrols until we can find out what it was and put a stop to it.

<Kup reaches forward and switches the camera off. The timestamp on the report registers as two days ago. Analysis of data loss indicates that unknown interference caused the message to reach Earth two days after it was recorded.>

The report itself is a voice recording, Kup's grizzled voice begins the report: "A situation was brought to our attention on one of the outlying Junkion worlds called Goo - apparently the world's biggest trash disposal. Reports of a Junkion operating base had been attacked and subsequently destroyed - I, along with Arcee, Wheelie, Sit-Com, and Phase-Ar volunteered when Elita one needed a recon squad. When we arrived, the place had been totally destroyed. No suggestion of survivors, which is rare among Junkion units. While we were trying to ascertain what caused the destruction of the base, Wheelie stumbled on something that I haven't seen since the days I was a young mech trying to learn my elbow from my exhaust ports - a death crystal. There won't be anything in archives about this one, as High Command eliminated all references and reports. You'll have to find out directly from them - Maybe Alpha Trion knows more than I do, but I don't think by much. I'll take a meetin' with ya at your leisure Prime, and give you the story. Astrotrain showed up, made off with the crystal, but not before using it trying to off Wheelie and Phase-Ar. Phase.. was busted up something awful. Some meatball field repair kept the energon loss to a minimum and we got him transformed and powered up enough to get us back so he could be repaired up proper. He'll be grounded for a while, I bet."

There's a beat pause, "Look.. if the Decepticons have this, it's bad news. Like Galaxy ending bad news. They're the last ones we wanted to have find these things, that's why it was High Command's call to erase it from existence. I dunno how they found out about them, or how they knew to come crawling around Goo.. but if they're looking for these things, we need to find them before they do.. or something really, really bad is gonna happen. That's the report. Kup Out." -- it's rare that Kup has a tinge of worry to his voice, and this definitely has the old mech shaken up.

Kup's familiar if not always welcomed face pops up on a vid-report.

"Twidget, you've got yourself a helper-mech for the next four cycles. Seems Dust Devil likes ta let his vocoder volunteer him for scut work. He's all yers for a bit of tidying and work in th' shuttle bays.

"Encore, ya should see th' stuff ya requested showin' up at your doorstep soon enough sep-rated from' th' rest of the things we picked up.

"Hot Rod, th' sparkle wax is in your room. There's a box of those crispy whathingamagigits you kids like to snack on too.

Since 2013, Kup was available for application.

In April of 2015 he was taken over by GilleyZ. For The Spirit of Freedom TP, he was @emitted by Zerombr.