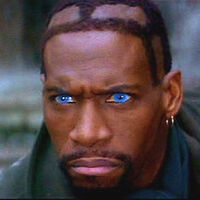 KILROY is an attempt by the US Army to combine man and machine into an elite soldier. Kilroy is a one-man fighting machine trained to counter Cobra's growing cybernetic armies. He is normally armed with a shotgun, compatible with an integrated targeting system. He is extremely strong and can lift almost twice his weight and carry it for many miles. He is quite courageous and almost impossible to talk down once in the heat of battle, but loyal to a fault. He is a soldier's soldier. Some members of high command wish the Joes had an army of Kilroys.

Kilroy was built using technology developed from the Robo-JOE project.

Kilroy is currently a reserve member of G.I. Joe.

Killroy was created and is played by CalihexInmate

In the Shattered Glass universe Kilroy is a cybornetic killer who signs the burnt and gruesome remains of his killzones with "Kilroy was here."