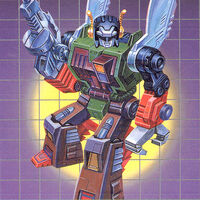 KICKBACK isn't always the most charming Decepticon you'll meet, but he does what he can to get the job done. A usually loyal, trustworthy guy, it kills him when he has to burn a contact, even when it's for a good cause. Kickback would prefer to persuade an enemy to the rightness of the Decepticon cause than lie or manipulate them, but when lives are at stake he's willing to resort to more underhanded methods. Humans are largely immune to his manipulative talents, due to his alien form, and he sometimes gets frustrated by the fear he causes in most Earthlings he meets. The only time Kickback enjoys recruiting double agents is when he feels he's convinced them that they're truly doing the right thing.

In his insect mode, Kickback can use his powerful leg modules to propel him up to heights of 40 feet and over distances of a tenth of a mile. Although small in this form, a single kick of his can punch a hole in a ¼" steel plate. In robot form he can use his wings to fly at speeds up to 30 mph for distances up to 100 miles. He carries a submachine gun that can shoot up to 300 rounds per minute of armor-piercing titanium-coated bullets.

Kickback's lack of weaponry makes him extremely vulnerable in insect mode. The nature of his leaping and flying abilities hampers his mobility in moderate winds.

Kickback was a data-shuffler before the war, sitting in a little cubicle by himself and processing field reports as they came in. The war brought him to the front lines, where his keen mind is appreciated even if his brusque manner is not. Even though he can be rude at times, most Decepticons realize his fuel pump is in the right place and he doesn't mean any harm with his lack of social etiquette.

Kickback was part of the crew of the Nemesis that escaped Cybertron and the Plait Expanse. He was spying on the evil Autobots from orbit around Earth when the Nemesis was attacked by GODS and crashed in Oregon, where Kickback remained offline until Megatron repaired him.

In 2016, Shrapnel and Kickback travelled to Cybertron to assist operations there, but were killed coming back aboard the Seizer.