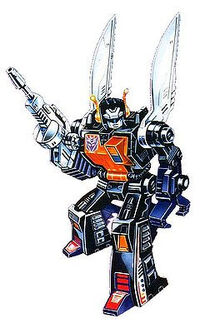 KICKBACK is as charming a guy as you'll ever meet - but it is a charm rooted in an uncommonly cruel cleverness. The singular purpose of any friendship that this Insecticon begins is to dig up embarrassing facts about the other robot or person so that Kickback can influence his "friend" into doing his bidding. Humans are particularly susceptible to his seductive talents, but even Autobots have been known to succumb. The only thing Kickback enjoys more than recruiting these unwilling double agents is destroying them after he's exhausted their usefulness.

In his insect mode, Kickback can use his powerful leg modules to propel him up to heights of 40 feet and over distances of a tenth of a mile. Although small in this form, a single kick of his can punch a hole in a ¼" steel plate. In robot form he can use his wings to fly at speeds up to 30 mph for distances up to 100 miles. He carries a sub-machine gun that can shoot up to 300 rounds per minute of armor-piercing titanium-coated bullets.

Kickback's lack of weaponry makes him extremely vulnerable in insect mode. The nature of his leaping and flying abilities hampers his mobility in moderate winds.

Kickback, Bombshell and Shrapnel landed on Earth in their own space pod before the Autobot ship arrived on Earth. Their pod crashed into the region of Bali that would become known as "Demon Swamp" and their idento-computers adapted them to transform into giant robot insects and eat organic food to survive.

The "Insecticons”' existence became known to both the Autobots and Decepticons after they began attacking villagers rowing though, and Megatron formed an alliance with them. The Insecticons’ unique powers proved an asset. Kickback, in particular was able to disable Skyfire’s transform circuit with a well-placed blow, and knock both Wheeljack and Brawn back down when they tried areal assaults (he also made short work of a combine, though that was more about goofing off). Later, the three rejoined Megatron at a nearby refinery, dining on the tasty oil. They aided the Decepticons in trying to drive off the attacking Autobots, but when the tide turned in the Autobot’s favor, Kickback and the others decided instead to simply eat all the energon cubes the Deceptions had been harvesting and scram, with Megatron angrily in pursuit. A Plague of Insecticons

Megatron didn’t hold his grudge against the Insecticons for long. When the Autobots invaded the canyon when Megatron was working with stolen electro-cells, he had the trio summoned to provide additional support in return for a reward. Kickback even scored a successful, though ultimately non-fatal, shot against Optimus Prime. Kickback thought the two energon cubes given as payment was pretty good though his companions disagreed, calling it “measly” when compared to the haul Megatron was pulling in. The trio only grew more agitated when the cubes went missing with a Decepticon insignia in its place. The Insecticons went back to the canyon, confronting the Decepticons, but Megatron was able to calm them when he figured out it was Mirage framing him. The threesome partook in a Decepticon trap using Mirage. However, they retreated once the electro-cells were destroyed in the battle which knocked the Decepticons out. Traitor

On one occasion, the Insecticons were chowing down on redwoods in a national forest when Hound, Beachcomber and Bumblebee arrived on the scene and attempted to stop them. Despite the equal odds, the Insecticons managed to overpower their Autobot opponents and send them into retreat after launching a massive fallen tree trunk at the heroes (naturally, Kickback used his legs to push the tree instead of his arms like the others). Megatron then arrived and offered a deal: if he led the Insecticons to a fresh new source of energy, they would aid him in acquiring some useful data from the heavily-guarded Iron Mountain installation. Agreeing, the Insecticons accompanied the Decepticons to the Nova Power Core, an energy source of considerable power. Consuming it, the Insecticons found themselves more than doubling in size and strength.

Naturally, both groups of 'Cons planned to eliminate each other at the most opportune opportunity, but the Insecticons got the upper hand by secretly placing all of Megatron’s troops under the control of Bombshell's cerebro-shells. Kickback and the others planned to use Soundwave to acquire Iron Mountain's data for themselves, but little did they know that the Nova Power in their systems was explosively unstable. With the help of the Megatron, the Autobots attempted to forcibly administer an antidote to the Insecticons which would reverse their invincibility and self-destruct cycles. Kickback tried to escape with Soundwave, but was felled with a blast of antidote. With Shrapnel and Bombshell also returned to normal, the three fled to fight another day. The Insecticon Syndrome

Again, the Decepticons and the Insecticons buried the hatchet. The Insecticons built up a massive clone army, and were using them to provide energy to the Decepticons. Again, Megatron was shortchanging them on their reward. Their clone forces allowed them to easily repel Autobot attacks and made them too threatening to the world’s food supply. When Cosmos had crashed in a valley, carrying a batch of new robotic insecticide, Thrust was sent to warn the Insecticons to stay clear of that area. Not surprisingly, they didn’t believe the sincerity of the warning. And, yes, Kickback gave Thrust a good kick for some laughs. After dodging some missiles from the angry Seeker, they went straight to the crash site to investigate. There, Insecticons found a field of Morphobots, plants that eat robotic matter. Not realizing the danger, they took their clone army right into the field to feed and instead had their entire group devoured with only Kickback, Bombshell, and Shrapnel escaping. Quest for Survival

Eventually, Kickback and company built up another clone army and went back to their usual tricks, now ravaging cities for energy, with the Autobots rushing to drive them out. When there was trouble on Cybertron, Optimus Prime tried to highjack the Decepticon space bridge, but The Insecticons ran off with the bridge’s control panel. They apparently couldn’t resist nibbling on the thing, because when Megatron later found them in a parking garage they had chewed it up. They dropped the panel and ran before they were chewed out themselves. The Revenge of Bruticus

BZero used to play Kickback on Transformers: Dream, and has occasionally tempted the character on TFU as well. As of 2014, Kickback is temped by Ignition. In 2017 he was taken back over by Bzero.