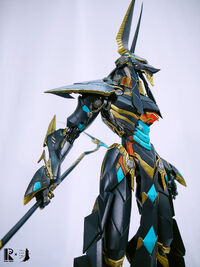 Khamsin is a sly and devious mech, especially when compared against other neutrals. His prior experience and life working in special operations, specifically search and recovery, have granted him a fair number of unique skills which he has built upon tremendously throughout his career as a rogue freelance. There's no side in the war, as far as he is concerned, as his own, and no greater goal than the ones he undertakes for himself.

Originally, Khamsin was a trained Search-and-Rescue mech operating under a different name, supporting Decepticon operations as a field medic and a recovery specialist for those either captured or wounded behind enemy lines. It was during these days he met the mech that would later become his Conjux.

However, as the war transitioned off Cybertron and to other worlds he found himself separated from his Conjux, and things spiralled out of control from there. His focus turned away from the war and his own work to trying to find the missing mech he'd sworn himself to. This created a very sharp divide between himself and his responsibilities with the Decepticons, especially when his hunt led him to Earth and he found that the Decepticon badge only hindered his hunt.

Breaking away from the Decepticons, he spent ages finding himself hiding within the mythologies of Earth cultures, adapting his form and tactics to the cultures he immersed himself in, including more martial-art based combat skills and weaponry over his rifles and blasters , as well as the jackal alt-mode and the Anubis-esque aesthetic of his main robot form.

After all, no one questions a god.

With the efforts of the factions shifting back to Cybertron, his own hunts have taken him back and forth between Earth and Cybertron proper, finding himself hiding within the Neutral factions and territories working on his own goals, and ambitions, simultaneously trying to find someone without, in turn, being found.

Since his return to Cybertron in 2020, Khamsin has reunited with Goth and began working towards brokering peace on Cybertron.

Without fanfare, without even a flash of an emblem, logo, or other sort of identifier, a video feed begins. Front and center is Khamsin, the jackal-esque mech sorting through notes on a datapad simply to ensure one last time everything is in proper order before he looks to the camera itself, ears angling forward. "Greetings and well met, Cybertron," he starts, and there’s a noted accent. Similar to Earth-based Oxford English at that. "Most of you do not know me. A few of you I’ve had the privilege and honor of speaking with, topics ranging from our hopes, dreams, ideals.. .and wounds of the past. But perhaps more critically, our future. Cybertron’s future." He clears his throat lightly. "Cybertron is in a delicate state. We can see signs of regrowth and rebirth. The planet is slowly restoring itself, and I’ve even bore witness to the Singing Crystals of Harmonex. A glorious sound, to be certain, but a sound that is merely in its infancy. I’ve seen the citizens of city-states work together to rebuild trade routes, to establish personal crafts and trades and unify around the collective will to move forward." He frowns. "However, I have also seen fear. Fear of the unknown. Moving forward is certainly an act of bravery and one which can cause even the most battle-hardened of mechs to give pause and question their motivations. I do not wish, for one moment, to speak lightly of those who are still taking comfort in their protective walls and shields of familiar faces and ideals, and what I ask of Cybertron as a whole is nothing easy by any means." He clears his throat again and looks towards the camera. "Peace in our time." He lets that settle for a moment. "I see Cybertron on the precipice of a new dawn, however still haunted by the feuds of her past. Autobot, Decepticon. Family names which bear upon their shoulders a history any of us would deem embarrassing and shameful. For millions of years, the death of our planet has come at the hands of two ideals unwilling to compromise with one another. Two ideals which believe that might makes right. I will not say if one or the other is better, or one or the other is right or wrong. They are two sides off the same coin. "So, I will instead say, it is time to cast aside that coin. It is time to lay down the badges that divide us and return to being what we all truly are. We are not Dominicon. We are not Autobot. We are not Decepticon. We are not Beasts, Destrons, Slaves or Masters, or anything that falls between. We have chosen to live here. We are Cybertronians. Unified we are stronger than anything that might harm our way of life." He looks down at his datapad and notes briefly. "And this is where I ask of Cybertron that one thing. Peace through Unification. And this is where I offer, in exchange, my services to you. An Arbiter. A voice. Someone who will stand amidst those who might try to trample this peace, either out of malice, fear, or misunderstanding. Someone who will risk all so that some day our Cybertron can be fully whole once more." He clears his throat softly again. "As you listen to this, or watch this, I am speaking with several factions throughout Cybertron and letting them know that our planet, our people, is ready for unity and to leave the feud behind. That those of us who wish to walk forward bravely into the new frontier are stronger and more numerous than those who cling to the past and live looking over their shoulders. That we are willing to bring anyone who so wishes to strive towards this unification with, regardless of their past and with only eyes towards the future. But that those who only wish to serve as anchors and hold us down, or who threaten our unification for their selfish, power hungry gains and egotistical weakness, will be left aside to be forgotten." He nods. "Our past does not dictate our future. Our future is determined by the choices we make now. Though I am no Prime, nor do I profess to be, however I will still strive to speak on behalf of all of us, because we are all equal as one." He pauses again and shuts off his datapad. "So...with that said, allow me to formally introduce myself. I am Khamsin. I am Cybertronian." He straightens up. "And I ask you all: join me in unifying our home. Allow me the honor of aiding you in building peace in a new era for us all. I thank you." The feed holds for a moment before ending.

Khamsin meets one of the Dominicons and asks Delusion's perspective.

An explosion to happen on the Decepticon communications link, but Blast Off has other priorities!

Khamsin survives an assault by Bruticus.

Deathsaurus meets up with Khamsin to discuss a strategy plan to save a friend and lover.

Created and played by Savage Ravage.