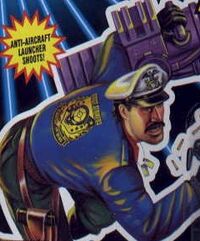 KEEL-HAUL graduated from Annapolis and Navy Flight School. He flew Phantom F-4s off the Intrepid in the late 60s. He attended the Armed Forces Staff College and the Naval War College in Newport, RI. He is a holder of the Navy Cross, DFC, and the Air Medal. Keel-Haul is a respected military historian, a nationally rated chess player, and possibly the world’s worst clarinet player. He has always been cool. He can set an F-4 down in a carrier deck at night with half his instruments, and walk away whistling -- the naval equivalent of jumping on a moving skateboard while blindfolded. According to Keel-Haul, no enemy is too great a threat that a few air-to-ground heat-seeking missiles won’t cure.

A native of Charlottesville, Virginia, Everett Colby attended the U.S. Naval Academy at Annapolis and the Navy Flight School.

During the 1960s, he made a name for himself flying Phantom F-4 fighter jets. He flew his F-4 Phantom II fighter with the U.S. Air Force's 433rd Tactical Fighter Squadron, also known as Satan's Angels. Before his tour ended, Colby completed 124 missions during the intense air war over North Vietnam and Laos and earned the Distinguished Flying Cross.

After his time as a fighter pilot, Colby became intent on becoming a commanding officer and attended both the Naval War College in Newport, Rhode Island and Armed Forces Staff College. Working his way up through the ranks, Keel-Haul had been awarded the Navy Cross, DFC and Air Medal before being given command of the new aircraft carrier, the U.S.S. Flagg. He is also a respected military historian, a nationally-rated chess player and a terrible clarinet player.

Keel-Haul became an honorary member of the G.I. Joe team when the Flagg was assigned as the Joes' carrier whenever their missions called for it. While under Keel-Haul's command, the Flagg rescued the crew of the Joe team's freighter, the Jane, after that vessel was sunk by a Cobra aerial attack.

The carrier also served as a base for the team's air cover during their first assault on the newly-created Cobra Island. During that battle, against Keel-Haul's better judgment, Ace took off in his Skystriker jet despite the fact that the carrier was severely listing after being struck by a tidal wave.

Some time later, Keel-Haul oversaw the Flagg's use as a staging ground for the Joe team's invasion of Cobra Island during Cobra's civil war. It was Keel-Haul's plan to use a stolen Cobra helicopter to deliver a recon team to the island just before the operation began.

Over the years, the Flagg continued to be used as G.I. Joe's headquarters at sea, and participated in many more missions, as well as the Battle of Benzheen. Keel-Haul remained in command of the Flagg, patrolling various hot-spots around the world after the Joe team was shut down in 1994.

Keel-Haul is the highest-ranking Naval officer supporting G.I. Joe. He personally commanded the USS Flagg, getting a series of age exemptions since he was really the only one qualified with Joe experience. In 2013, Piranacon destroyed the Flagg. Keel-Haul went down with the ship, but Deep Six saved him from an air pocket in the conning tower. After he recovered from the destruction of the USS Flagg by Piranacon, Admiral Keel-Haul retired from active service.

Keel-Haul is the highest-ranking Naval officer supporting G.I. Joe. He personally commanded the USS Flagg. Since he's in his 70s, they usually don't let him pilot jets anymore.  ;) In 2013, he retired, leaving Cutter the highest ranking Coast Guard/Navy officer, and Wet Down the Navy field commander.

Keel-Haul has been temped by Bzero when needed, but is available for application.

In the Shattered Glass universe, Keel-Haul is known for keel-hauling disobediant sailors off the side of his aircraft carrier, which is almost uniformly fatal.