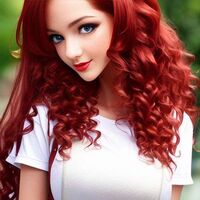 Katie Sorensen is a happy girl, with a life that only a select few would enjoy. She's a storm chaser for the National Severe Storms Lab out of Norman, Oklahoma. Being an adventurous sort, she's been known for her close approaches to the storms, especially the tornados which she chases, she's also known a bit for showing up on the Weather Channel and local weather stations routinely, in reporting activity taking place. Growing up around rural Wakita, she's happy in Norman, where she can go home to see her family sometimes. But she's only in Norman when she's not on the road... On the road, she might be anywhere, depending on what the weather is doing. She usually drives a red Dodge pickup.

The Desc of Doom (Just to pad the article)

The woman before you has the general appearance of being around 20-22 years of age. She stands to a full height of 6'3" tall, and her lithe form weighs in at approximately 148 pounds. Her figure, not a fully perfect 'hourglass' form, is a little bit broader to the shoulders. The broader shoulders support the weight of her ample, full chest, below them, easily.

Her form narrows dramatically towards the waist, the width of her hips only being two thirds, at absolute most, the width of her shoulders. The narrowness of the hips is offset slightly by the long, slender, but slightly muscular legs below them. The musculature of her legs and arms, and the narrowness of her stomach, indicate that she either works out a great deal, or does not gain weight easily.

Her arms, though visibly muscled, are narrow and slender for it, still, a tribute to her overall litheness in frame. Her hands have long fingers, and she keeps her fingernails grown out to a half an inch beyond the tips of the fingers. The fingernails are kept delicately painted, in a light shade of red.

Sitting atop her shoulders, she has a slender, long neck, atop which sits a softly rounded face. She has light, nearly sky blue eyes, which are accentuated delicately with light reddish eyebrows, and dark, long eyelashes, given a slight further accentuation with a tiny bit of makeup around them, for effect. Below the eyes, she has very high cheekbones, given accentuation with a tiny bit of blush, and setting a small, delicate nose between them. The cheeks are thin, below the bones, curving down succinctly towards her gently rounded chin, stopping only for her lush, smooth, full lips, which she keeps done in a light glossy shade of red. Her forehead is visible above her eyebrows, highlighting her light, though not pale, complexion, which carries on throughout her features, except for areas touched with her light makeup.

Above her forehead, her hair flows, back down the sides and back of her head, flowing out just enough that it doesn't cover her ears up totally. Her hair maintains a deep, reddish color throughout her head, not a light, bright red, but a bit darker, and deeper color, as it flows down in broad, natural curls, spilling down the sides of her head and shoulders, and spilling down her back, clear down to the area of her waistline. Some of it flows over her shoulders and forward, as well, at times, spilling down over her shoulders, and to the sides of her chest, and down.

Right now, she is dressed in the more casual of the outfits which she wears to work. She wears a not-too-dirty pair of gray mid-top hiking boots with brown trim, laced up to the top, with the tongues of the shoes up above the laces. coming down to the shoetops, she wears a pair of tightly form-fitted, well worn blue jeans, which remain tight up through the crotch, and around her hips. The jeans come up to the tops of the hips, the tops of them going slightly downward towards the middle, to around 3 inches below the navel. The pants are held securely to the tops her hips with a thin, black belt, with a small dull buckle fastened over the top button of the jeans. Above the jeans, her narrow, taut waistline is bared, up to the bottom of her rib cage.

She wears a bright red t-shirt above the jeans. The shirt is tightly fitted onto her, and pulls tight around the shape of her figure, tight both around and below the full endowment of her upper chest. The shirt has a large logo on the front of it, clear up from the top of the chest, clear down to just above the bottom, a circular logo, with a dark blue bottom, and a light blue top, with the silhouette of a white flying bird, between the light and dark. In white letters next to the bird, the letters 'NOAA' are emblazoned onto it. The edges of the logo are white as well, with 'National Oceanic and Atmospheric Administration' written in blue letters, wrapping all the way around the logo.

On top of the T-shirt, she wears a very light, almost see-through red, completely unzipped and open nylon rain jacket, with a small, 3 inch version of the same logo on the left, at the top of the breast area. On the uppermost part of left sleeve of the jacket is another small logo, a 4 pane 'pie-chart' logo, with a small image of a tornado on the top, raindrops on the right, snowflakes on the left, and multi-forked lightning bolt on the bottom. Along the top 2/3rds of this logo is the inscription 'National Severe Storms Laboratory', along the bottom is 'US Department of Commerce', and 'National Oceanic and Atmospheric Administration', in smaller letters. Below that logo is another small one, showing a dark cloud over the sun, with a single lightning bolt from top left to bottom right, with 'National Weather Service' in blue letters wrapped around it, with a small star at the very bottom. On the uppermost part of the right sleeve, is a larger logo, a picture of a tornado vortex by itself, against a blue background, the funnel curving from top right to bottom left. The words around the white edge of this logo say 'NOAA' at the top, and 'Project Vortex' at the bottom.

Her hair spills down freely over the jacket, not blending in totally as its a bit darker of a red. On the top of her head, her normally teased hair in front is up to a 'down' point above her eyebrows, held down from its usual position by a red mesh-backed baseball cap. The cap has the same basic 'NOAA' logo as the jacket and the T-shirt, in 3 1/2 inch form, in the center. She wears her usual black digital watch, on one wrist.

Katie has been the concept and OC of Stormwind/Carrie since day one.