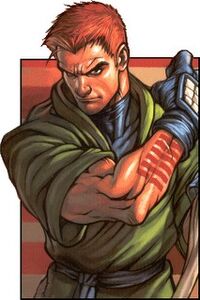 Snake-Eyes realized that he, Jinx and Storm Shadow are all that is left of the Arashikage ninja clan. Although he had set on a path to revive the clan, neither he nor any of the Joes have expected Kamakura to be the apprentice he is looking for. An amazing series of events have brought the two men together and Kamakura is now honored with the task of continuing the clan's traditions.

In many ways, Kamakura is the same as his master and in many ways, his opposite too. Like a true ninja, Kamakura likes to blend in the background, unseen and undetected until the moment to strike arrives. He prefers to perform every action in quick, quiet and efficient manner. This same trait, though, is what also sets him apart from his mentor. He tends to be impatient and very excited by events. And while Kamakura has many levels to go before he can reach Snake-Eyes's status, the master knows that every steel can be turned into a finely tuned sword.

Born in 1977, Sean Broca was the son of Fred Broca, the original Cobra Crimson Guardsman, and later the adopted son of Wade Collins, a comrade of Snake-Eyes, Storm Shadow and Stalker from their days in Vietnam.

The Broca family were sent from Springfield to live on Staten Island on the road leading into Fort Wadsworth, allowing Fred Broca to observe the G.I. Joe operations there. Together with his sister Sean remained unaware that his parents were Cobra agents. They were not told when their father died in a Cobra operation in the Sierras and a man looking just like him was sent to live with them in his place. They kept asking what was going on but were still not told. However one day the new man came home with Stalker and Snake-Eyes. He told them that his former comrades had made him realise how the entire family had been exploited and used by Cobra and that he had had plastic surgery to become a "Fred", identical to their real father. Wade Collins, his real name, had decided to leave Cobra and start a new life free of the organisation. The others had almost convinced him to ask the Brocas to come with him but Wade told them they deserved so much better than him. However they all chose to come with him and left to start a new life together.

Many years later Sean was approaching his seventeenth birthday and wanted to enlist in the army. Wade was deeply reluctant to sign the papers giving parental permission but proved unable to talk Sean out of it so he asked Sean to write to Snake-Eyes. Snake-Eyes responded with a letter about the realities of soldiering. Wade told Sean that if he still wanted to join the papers would be signed but Sean wanted more time to think about it. Sean finally decided to enlist even after Snake-Eyes gave him some perspective on the Army, secretly hoping to be like the man he now considered his father.

After distinguishing himself early in his career, Sean was invited to join a covert operations unit called the Hammer Team. After nearly a year of training the five member team performed well on their first serious mission into Afghanistan. Sean became close friends with his teammate Mikhail Derenko, a former Russian Spetsnaz commander and undercover Crimson Guard. The team's second mission was led by the former G.I. Joe team sergeant, Duke -- who had been working for a secret government organization since the break up of the Joe team -- and undercover operative Chuckles. The goal of the mission was to take down the mercenary Firefly after an elaborate trap was set. At the same time, Snake-Eyes and his new apprentice, Ophelia planned to capture Firefly. Unfortunately, the mission was a disastrous failure. Sean watched the rest of the Hammer Team die even as Ophelia was mortally wounded by Firefly. The operation deeply scarred both Sean and Snake-Eyes.

After seeing another person he cared about die, Snake-Eyes broke off his engagement to Scarlett. Sean took some time off from the Army and tracked Snake-Eyes down at his mountain cabin, hoping the commando could help him deal with the pain and anger over what he had seen. Snake-Eyes agreed to train Sean as a ninja, eventually with the help of the remaining members of the Arashikage clan -- Jinx, Nunchuk and T'jbang. Sean came to call Snake-Eyes "Silent Master."

Almost another year passed, and Jinx discovered that Firefly was in Tokyo to meet with the "Nowhere Man", an unidentified man who was recruiting soldiers and mercenaries, including former members of Cobra. While tracking Firefly, Sean, Snake-Eyes, Jinx and Budo had the mercenary under surveillance when he met with Storm Shadow to recruit him. A confrontation followed and Snake-Eyes once again fought his sword brother, even as the others tried to capture Firefly.

Duke and Chuckles arrived on the scene and soon intervened to help the ninjas evade the Nowhere Man's men. Duke then revealed that the Nowhere Man was actually Mikhail Derenko, who pretended he died with the rest of the Hammer Team. Sean was now determined to get his revenge on Firefly for killing his friends and Derenko for betraying him. At a nightclub in Japan, the mercenaries and the former Joes fought again as Derenko and his men attempted to access an old Cobra weapon locked in a vault that could only be opened by Cobra's high command or members of the Crimson Guard. Sean was shocked to discover that Derenko's latest recruit was his own father, former Guardsman Wade Collins. Wade explained that he only joined with Derenko to bring down his organization from the inside to atone for his past and to make his son proud. As Sean lunged at him, Derenko redirected his attack, causing Sean's sword to wound his father. As his father lay dying in his arms, Sean told him he had always been proud of him. Derenko made his escape, but not before Sean attacked him with throwing stars and blinded him in one eye. But it was too late to save Wade Collins. Weeks later, having passed his final trials, Sean was officially welcomed into the Arashikage clan, receiving the clan tattoo and naming himself "Kamakura" after the clan's golden age.

Following his induction into the ninja clan, Kamakura began working for the same secret organization as Duke.

Kamakura is an active member of G.I. Joe.

In 2015, after missions in Tibet and Syria, Kamakura returned to the Pit.

In 2017 Kamakura was assigned to Strike Team Bravo, operating out of the original Pit.

Interrogator thinks Storm Shadow has gone Rogue and goes to find him.

On 11/8/10, I was contacted by a unknown source via dalnet, who was asking for information on how to override the effect of Cobra's Brainwave Scanner. He recognized me right away and knew that my sensai may have the information he needed, and that I was a good way to contact Snake-Eyes. I assumed that it was probably Storm Shadow, once again, breaking from Cobra's clutches. So I set up a meeting with him at a rented dojo in Miami, Florida. To my surprise, it wasn't Storm Shadow at all, but... Interrogator. He confirmed that there is another coup building in Cobra's ranks and that he wanted the brainwave scanner destroyed. I asked him if he needed amnesty, or any other services from the US military, and he claimed to be a citizen of both Cobra and Russia, which makes me wonder if he has safehouses in Russia as well. Afterwards, he returned to Cobra, before they suspected his absence. Just a heads-up that something big is going down at the Snake House, and this may be our only chance to destroy that hideous device. In the past, Interrogator has always sided with Destro, which makes me think that the Snakes and the Iron Grenadiers are at it. Again. This wouldn't be the first time, of course, but there's no confirmation of Destro's involvement. Lemme know what steps I should take in this. Like I said, this is too good an opportunity to pass up. -- Kamakura

Today, I investigated the Geoffrey Gaines murder in Manhattan (see post 10/105) which led me to the Shades Club in Manhattan. Several peopel were discussing the murder in the foyer, apparantly the man wasn't very well liked or trusted. Upstairs, Major Bludd himself was talking to a few associates about a murder. I tried to get him to admit to Gaines, with no luck and a firefight broke out between me and Bludd. Bludd escaped, and I tried to follow, but security was on my way and I couldn't get to Bludd in time. I'll be recovering from a couple gunshot wounds, so I'll be around if you need a follow up. -Kamakura.

Related Log: An Evening At The Shades - Kamakura goes in search of clues to the death of a prominent executive, and the trail leads directly to Major Bludd.

RE: Destro and the Weather Dominator

In response to Scarlett's recent report on Destro and the weather Dominator, has anyone considered contacting Dahlia Cole? His current- or soon to be Fiancee according to the press. She has offered to demonstrate the Weather Dominator, which proves that she has some working knowledge of the device, and also her reports on Destro's conditions and the state of Trans-Carpathia. If we are looking for an inside person, maybe she is the one to contact, or at least observe.--Kamakura

Hey. I received a letter today signed "N" that told me there's going to be a KGB New Year's Celebration in Moscow. Members of Cobra have been invited, as well as prominent Iron Grenadiers. This is probably something we should look into getting an invitation to.--Kamakura.

Kamakura has been temped by CalihexInmate but is currently available for application.

Add a photo to this gallery

Retrieved from "https://tfumux.fandom.com/wiki/Kamakura?oldid=77588"
Community content is available under CC-BY-SA unless otherwise noted.