This page is for the evil Junkion robot. For his neutral main-universe counterpart, see Junkyard. 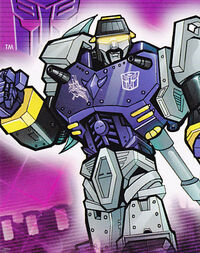 In the Shattered Glass universe, JUNKHEAP is a slaver and spare-parts broker. If you need a part, or a whole robot, JUNKHEAP will get it for you for a price. His rates are low, but if you're not happy -- keep quiet about it, or JUNKHEAP will return with a horde of Junkions, and you'll be quickly added to his "inventory."

Even more than most Junkions, JUNKHEAP's crazed non sequitur-laced speech pattern is virtually unintelligible to outsiders. When this causes problems with communication, however, JUNKHEAP will often react with sudden and fatal violence, adding spare parts for the next customer who might be a little less interested in chatting.

JUNKHEAP is notably bad at forging lifelong business relationships, considering how likely he is to kill and eat both his customers and his wares. However, for the well-armed and discerning client, JUNKHEAP may have parts and slaves available from few other sources.

The Hive is order. You are in chaos. Your destruction will bring order.

Junkheap was one of the original Junkions "recruited" by Wreck-Gar - a poor neutral merchant whose mind and body were ravaged and forced into Wreck-Gar's control. Captured with Wreck-Gar, he was locked away on Paradron, intended never to be free again.

Recently Junkyard was freed by Tracks and Wheeljack, and has teamed up with Ultra Magnus and Wreck-Gar to enact his revenge on all of Cybertron. He participated in the attack on the Temple of Knowledge, although he was badly damaged when Wheeljack's doomsday device blew up in the Star Hammer.

Junkheap is being temped by Bzero, but is available is someone else would like to take him over for the rest of the Shattered Glass TP.

Retrieved from "https://tfumux.fandom.com/wiki/Junkheap_(SG)?oldid=38223"
Community content is available under CC-BY-SA unless otherwise noted.