View source
The name or term Judy Witwicky refers to more than one character or idea. For a list of other meanings, see Judy Witwicky (disambiguation). 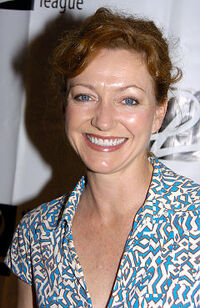 JUDY WITWICKY is Sparkplug's sister-in-law. When Sparkplug and his son Spike joined the Autobots, Judy and her husband Ron took on the responsibility of looking after Sparkplug’s second son Buster. A former music promoter and store manager, Judy is competent and organized, as well as a skilled and empathetic caretaker. After helping raise her nephew Buster and her own son Sam, Judy has now taken on the responsibility of caring for her aging husband Ron. A perpetual multitasker to the point of being scatterbrained, Judy never shies away from giving her opinion on any topic. She is also notoriously unable to hold her alcohol, specifically wine.

Judith "Judy" Taylor was born in 1960. She met her future husband, Ron Witwicky, at the Newport Jazz Festival where she was working as a promoter. As newlyweds, Ron and Judy would regularly include Sparkplug and his wife in their weekend plans (usually involving going to different restaurants, card games that went on until three in the morning or extended listening parties for their favorite albums) before Spike was born. In the mid-to-late '70s, Judy saw a kindred spirit in her sister-in-law.

After her sister-in-law's sudden death, she occasionally helped Sparkplug transition from supporting parental player to the role of single parent, showing him all of the things Susan did for the family, oftentimes without his knowledge.

Though she dreamt of having a family, she put those plans on hold as her and Ron agreed to look after Buster when Sparkplug was sometimes forced to work on various construction contracts with his older son to make ends meet. Her relationship with Sparkplug became more strained as he left Buster in their care not only during work excursions, but for huge periods of time while he was helping the Autobots.

Though she rarely hid her irritation with Sparkplug, she never showed any frustration around Buster. In Judy's mind, she is honoring the memory of her beloved sister-in-law by caring for her sharp-as-a-tack son.

As age and responsibility crept in, Judy went from being a music promoter to more grounded and stable forms of employment. Sharing Ron's free spirited nature, Judy declined a high-paying job in sales for a telecommunications company to be a manager at a local community co-op grocery store. The wage, combined with Ron's wage as an English teacher enabled them to buy a tiny two-bedroom house in a decidedly blue collar neighborhood in Portland. With Buster in the household, Judy agreed to put off parenthood until he neared graduation (she will forever continue to blame Sparkplug for her family's late start in parenthood and also blames him for any early ailments Sam Witwicky suffered, from colic to ear infections). Despite the tensions of raising someone who is not an immediate part of your family, Judy remained Buster's fiercest protector, even moreso than Ron as she sees herself as having an obligation to be the mother that Buster never got a chance to know.

A perpetual multitasker to the point of being scatterbrained, Judy never shies away from giving her opinion on any topic. She is also notoriously unable to hold her alcohol, specifically wine.

In 2011, due to world-wide flooding, Judy and Ron abandoned their home and took residence aboard the Ark until the waters receded.

In late 2012, Ron and Judy decided to retire in Washington, thanks possibly to a few legislative victories that happened in November in that state. Currently, Ron and Judy are enjoying retirement life and doing stuff they've wanted to do since deciding to care for Buster part-time nearly 28 years ago. This includes gardening, traveling, volunteering, adopting a weimaraner, and sending bi-weekly college care packages to their son.

On April 7, 2014, Judy attended the handfasting of Buster Witwicky to Jesse Macchio.

In 2016, a dip in Sparkplug's health brought him very close to death. When Sparkplug recovered, he took what might be his last trip to Cybertron, to visit the building named in his honor. Spike went with him, bringing Ron and Judy as well.

Judy primarily serves as a background character for the MUX, existing in many-a-flashbacks that involved Sparkplug's decision to protect his son Buster until he was old enough to join the Autobots.

Ron and Judy Witwicky are currently jointly temped by Bzero and SpikeWitwicky in flashbacks. However, they are available for application for those who would like to play them in the current time.

"[giggling] I love it when you call me 'young lady,' you dirty old man."

In the Shattered Glass universe, Judy is a strict taskmaster for her and Ron's small scale drug-dealing operation.

Formerly a nurse, Judy spent the majority of her time at the hospital she worked at learning the tips and trade of the drug business through other coworkers. But being a drug dealer can be just as demanding as a nurse. You have to keep inventories and keep schedules. Unfortunately, her husband doesn't share her work ethic, so she spends a large portion of time bossing her husband around to weigh this and count this and clean this damn sty up.

In the late '80s and early '90s, Judy's house became the unfortunate refuge for Spike and Buster, routinely running over to the mellower Witwicky whenever their father became excessively violent. Worried that Buster and Spike's situation may draw certain blue-clad officers, Judy routinely shooed the younger Witwickys away, bribing them with everything from soda to a $10 spot to get out of their hair. Though she later bore some small regret for her actions - leaving the Witwicky kids to fend against their drunk, abusive father - she took comfort with the following mantra: "Heyah, we all gotta make a living."

Judy is a character from the live-action TF movies.