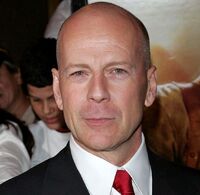 President Joe Colton is a strong, hawkish leader who ran on a platform of aggressive multinational defense and was elected in a landslide during a time of great economic prosperity.

A graduate of West Point, Colton rose through the ranks and distinguished himself as an outstanding soldier. He was recruited by Special Forces and became a Green Beret, participating in covert missions in trouble spots around the world. Soon he was the most sought after expert on secret operations and successfully led many of the most challenging missions ever conducted. In 1963, he was appointed by then-President John F. Kennedy to create and command an "ULTIMATE freedom fighting force." Joseph COLTON himself “retired” from the team and disappeared from the official military roster. He later went into politics and with the help of his media-savvy wife JANE COLTON skyrocketed straight to the top of the US political spectrum.

1960. He was recruited for Special Forces, and later became a Green Beret. In 1963, he was appointed by then President John F. Kennedy to create and command an "ULTIMATE freedom fighting force." It was at this time that he received the code name G.I. Joe.[2]

He later "retired" from active military duty at some point in the later 1960s. He later was placed as the head of a secret Strategic Defense Initiative installation in New York. There he served with the lead scientist, G.I. Jane, who originally maintained cover as a combat nurse.[3]

When Joe Colton ran for office, JANE COLTON was there as well, managing his campaign and ruthlessly eliminating the competition though blackmail, dirty tactics and shrewd politics.

In 2008, partially benefitting from the strong economy and positive gains in US military actions abroad, Joe Colton beat out Hussein Dunham to win the Presidential election.

In 2009 President Colton and his wife Jane began investigating reports of aliens hiding in the US, wishing to exploit alien technology to increase the US's power.

In April 2011, Colton announced that he would be running for re-election in 2012, and on November 6, 2012, he defeated Republican nominee Mitt Romney in a statistically-suspicious landslide to win the electors needed to be elected to a second term.

In 2012, Colton authorized General Flagg to use the GODS system to cripple the Nemesis and knock it out of Earth's orbit, inadvertently causing it to crash into Mount St. Hilary. Nonetheless, Colton has considered the demonstration to be a success and approved its use against both foreign and domestic enemies.

In 2013, Jane Colton quietly initiated divorce proceedings against her husband President Colton. The President has used his influence to keep this fact out of the papers.

President Colton uses G.I. Joe as his private secret police, "eliminating" anyone who questions his authority.

As a TP Character, President Colton is played bzero.