View source
The name or term G.I. Joe refers to more than one character or idea. For a list of other meanings, see G.I. Joe (disambiguation). 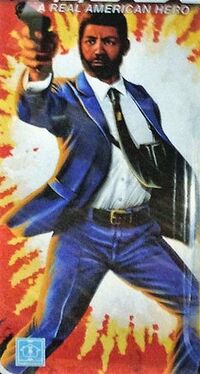 A graduate of West Point, Joseph Brady Colton, Code-name G.I. JOE, rose through the ranks and distinguished himself as an outstanding soldier. He was recruited by Special Forces and became a Green Beret, participating in covert missions in trouble spots around the world. Soon he was the most sought after expert on secret operations and successfully led many of the most challenging missions ever conducted. With the rise of the Cobra organization, it became apparent that a special team was needed to fight this dangerous threat. G.I. JOE was chosen to form this elite force, and the GI Joe team was born. G.I. JOE himself “retired” from the team and disappeared from the official military roster. But unofficially, he was first the head of a secret strategic defense initiative installation whose lead scientist is G.I. Jane, and now acts as the G.I. Joe team's top adviser in Washington.

The man who would become the legendary G.I. Joe graduated top of his class at West Point's United States Military Academy in 1960. He joined Special Forces and quickly distinguished as an outstanding Green Beret. In 1963, Lt. Colton's special forces team was overrun by North Vietnamese troops in the central highlands of Vietnam. Only Colton, his first Sergeant "Top" Wenzel and Specialist Angel Vasquez survived the attack. On the extraction chopper, Colton was given orders to report to the President immediately, but he refused to go, demanding to stay with the injured Vasquez, who died shortly afterward.

Colton met with President John F. Kennedy personally, and was appointed to lead an elite team of soldiers reporting directly to the President. A year later, the team went into operation under the name "G.I. Joe". The name kept the team anonymous and elusive, and became the unofficial code name for Colton. The team was involved in missions all over the world, assisting other units and participating in covert operations throughout the 1960s.

In 1969, Joe grew tired of a soldier's life and took a well-deserved sabbatical. He began to travel the world and explored some of the most exotic and dangerous parts of the world, having a number of adventures. In 1970, he became a part of the secretive group known as the Adventure Team. Throughout the next decade, Joe and his team worked for private groups, serving as guides and rescuers to archaeologists and other scientists working in the field. The team even worked for various government agencies on occasion. The Adventure Team disbanded as the 70s came to a close.

In the 1980s, Joe returned to work for the U.S. government as a security specialist, helping to protect many top secret installations. Joe became chief of security for the secret Strategic Defense Initiative installation hidden inside New York City's Chrysler Building. A highly-advanced laser weapon was built and tested there by a group of government scientists led by Jane, the former nurse of the original G.I. Joe team. As "G.I. Joe", Colton was well-known, but he tended to keep his identity a secret, since so many of his team's missions remained classified.

In 1988, the SDI facility came under attack by a large number of Cobra Vipers. The current G.I. Joe team sent a group to assist in the defense of the laser. Colton met Hawk, the Joe team's commander and together they fought off Cobra's attack. Hawk was so impressed by Colton's leadership in the situation, he made him an honorary member of the team. Joe was so amused by Hawk's offer that he revealed his and Jane's true identities.

Years later, Cobra again attempted to take control of the SDI building. Joe teamed up with the G.I. Joe team once again and used portable battle copters to fight off the terrorists. Cobra managed to fire off one shot with the laser, which was only used to destroy a ship running drugs into their town of Broca Beach. Months after last working with the Joe team and a short time before the team was disbanded, Colton was called back into active duty for one last top secret mission, the details of which remain classified. A short time after the Joe team was shut down, Colton and Jane -- still working at the SDI facility -- helped a small team of Joes in their mission to transport a top secret electronic device and evade Cobra.

Years later, after the Joe team was reinstated, General Colton came out of retirement to help the Joes by filling in as their commanding officer in the absence of Hawk.

In August of 2009, after Cobra Commander's Reconnaissance Jet was shot down over Ohio, General G.I. Joe and Temera tracked down Cobra Commander and cornered him in a parking garage in Fairborn. However, the Commander was able to overpowered them and escape.

As of early 2010, General G.I. Joe recovered from Cobra Commander's assault and moved his office to the Pit to help advice the G.I. Joe team as they continued their search for the missing Cobra leader. Upon the Commander's return, General Colton returned to Washington, DC, to look after the G.I. Joe team's interests while Hawk commands the team from the Pit.

In 2012, Colton briefly took over Joe leadership in the US while Hawk ran African operations from Germany. However, since Hawk's return to Pit, Colton has resumed his role as G.I. Joe advisor and advocate in Washington, DC.

In August of 2018, Volx, disguised as Joe Colton, lured G.I. Jane out of the Pit, where they met with Hooud. Hooud and Voorr killed Jane, and Hooud replaced her at the Pit.

Although Colton sometimes acts as G.I. Joe's commanding officer, officially he is retired and doesn't show up on any public list of generals.

In the Shattered Glass universe, Joseph Brady Colton is President.