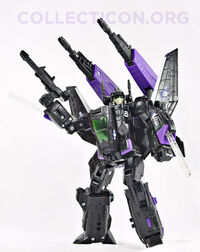 With a reckless daring that comes from being one of the swiftest of all the Autobots, Jetfire is the most eager of his comrades to plunge into battle. But his bravado is tempered by one overriding thought: he sincerely believes that victory over the Decepticons can only come through advancements in Autobot technology. As the first of a new generation of Autobots such a credo is perhaps only natural. Also, because he was created on Earth, Jetfire is one of the few Autobots who has no memory of his home planet. His allegiance to his cause is only matched by his devotion to scientific research.

In jet-fighter mode, Jetfire's unique swing-wing design allows him to take off like a normal jet and then, pulling his wings back, reach speeds of up to Mach 4.2. Adding twin supersonic combustion ramjet (i.e. scramjet) engine modules along with twin liquid hydrogen fuel tanks allows Jetfire to achieve orbital velocities, or to even escape Earth's gravity altogether. With this capability, he can launch like a missile, shoot up above the atmosphere, and, at a speed of Mach 29, dive down like a blazing meteor (hence his name) half a world away only 30 minutes later. In robot and jet mode, he is equipped with four independently targetable particle beam cannons around his head and eight heat-seeking armor-piercing missiles.

Jetfire's range is limited by his fuel consumption; any transatmospheric trip requires his refueling when he lands. Since he is newly constructed by Shockwave, he is prone to numerous mechanical failures as the bugs in his system are worked out. Anything from a malfunctioning radio to an engine stall in deep space has been known to happen. 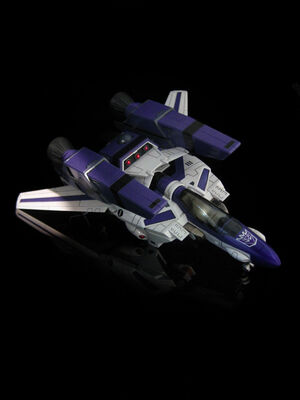 In Decepticon World, Jetfire was built on Earth by Shockwave to guard the skies from human retaliatory strikes. Jetfire, however, became troubled with the Decepticon's treatment of the natives of Earth, and asked to be transfered to Cybertron. There, he was recruited as a double-agent by the Autobots, who even allowed him to kill one of their own in front of Megatron to re-establish his credibility.

Jetfire held to his promise, despite being repeatedly tempted with his new position as second in command of the Decepticon army. During the battle for the Space Bridge, Jetfire managed to control the bridge's systems and send all remaining Autobots to the planet of Nebulous. While on Nebulous, Bumblebee officially annointed Jetfire as an Autobot.

Jetfire is controlled by the same player as Spike.