This page is for the heroic Autobot Jetfire. For his egotistical Shattered Glass counterpart, see Jetfire (SG). 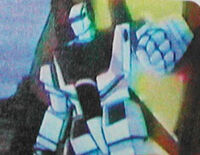 With a reckless daring that comes from being one of the swiftest of all the Autobots, Jetfire is the most eager of his comrades to plunge into battle. But his bravado is tempered by one overriding thought: he sincerely believes that victory over the Decepticons can only come through advancements in Autobot technology. As the first of a new generation of Autobots such a credo is perhaps only natural. Also, because he was created on Earth, Jetfire is one of the few Autobots who has no memory of his home planet. His allegiance to his cause is only matched by his devotion to scientific research.

In jet-fighter mode, Jetfire's unique swing-wing design allows him to take off like a normal jet and then, pulling his wings back, reach speeds of up to Mach 4.2. Adding twin supersonic combustion ramjet (i.e. scramjet) engine modules along with twin liquid hydrogen fuel tanks allows Jetfire to achieve orbital velocities, or to even escape Earth's gravity altogether. With this capability, he can launch like a missile, shoot up above the atmosphere, and, at a speed of Mach 29, dive down like a blazing meteor (hence his name) half a world away only 30 minutes later. In robot and jet mode, he is equipped with four independently targetable particle beam cannons around his head and eight heat-seeking armor-piercing missiles.

Jetfire's range is limited by his fuel consumption; any transatmospheric trip requires his refueling when he lands. Since he is newly constructed by Shockwave, he is prone to numerous mechanical failures as the bugs in his system are worked out. Anything from a malfunctioning radio to an engine stall in deep space has been known to happen.

Jetfire was built by Shockwave, but defected to the Autobots.

Jetfire is head of Autobot Aerospace. In September of 2009, he was promoted to Autobot Command. On occasion, he has been appointed acting leader of the Autobots on Earth when Optimus Prime and other high-level Autobots have been gone or inactivated. In August/September 2011, he was dispatched along with Dust Devil and Cuffs to the Temple of Knowledge to provide air support for other Autobots on this mission. During this mission, he encountered Cyclonus. Throughout the battle, Jetfire steadily gained the upper hand, slowly wearing down the ruthless Decepticon. However, Cyclonus, near defeat, fired a shot that stunned Jetfire, giving Cyclonus enough time to close in on Jetfire and deliver a catastrophic, close-ranged blast to his head. Jetfire sustained a catastrophic injury that destroyed his memory circuits and his personality circuit. He was brought back to Autobot City where he was restored, but his personality and memory circuits remain destroyed. Because of the worldwide flooding, an executive decision was reached to still use Jetfire (who could still fly halfway around the world in 30 minutes) to shuttle supplies to humans in need.

The approach seemed to work, human lives were being saved. But Jetfire's 'shell-like' personality took on strikingly similar characteristics to his early Decepticon incarnation when he was first being developed (but not fully complete) by Shockwave. He retained an aggressive attitude toward enemies (the Decepticons) that borderlined on hatred, even though he's currently void of emotion. In a fight with Starscream, the Decepticon seeker eventually overpowered Jetfire and took him back to Trypticon, but not before a battle-frenzied Jetfire tried to rip out his old ally's wing and bash his old friend's face into a rock embankment. Now with Jetfire immobilized in the medical wing at Decepticon headquarters, Starscream faces a moral crossroads: does he reprogram Jetfire to the Decepticon that he always hoped he would be... or use Jetfire's vulnerable state against the Autobots and plug in a simple order to attack a heavily populated human area... with Jetfire's Autobot insignia in plain sight?

In 2012, Jetfire was infected with the Dweller virus.

Prime secretly left Earth with Sky Lynx in November of 2012. When Jetfire recovered from the Dweller virus, he was made Aerospace CO in Sky Lynx's absence, and later asked to take over Autobot Command until Optimus Prime's return.

When a jet flew from the Shattered Glass universe through a portal into Wheeljack's lab in 2013, Benin-Jeri and Jetfire took the crashed jet to the examination room to study its origin. There, Benin-Jeri discovered that the jet had a negative polarity on a quantum level, an interesting discovery that may lead to a means to identify Shattered Glass agents on positive-polarity Cybertron and Earth.

On the fourth of July, After being rigged with a tracker and repaired just enough to remain functional by Spike Witwicky, Jetfire, and Throttle, Nightlash was found by Decepticon forces in a comatose state. Assisted by Rainmaker, the sweeps Scourge and Plunder managed to get her stabilized and back safely to Trypticon. During the flight back, a tracking device belonging to the Autobots was found on Nightlash and destroyed.

In 2014, First Aid was able to reverse the effects of the Dweller virus on the Weatherbots, using a modified version of the cure developed by Jetfire and Starscream. In October of 2014, Jetfire provided support for a small team of Autobots and G.I. Joes who infiltrated Decepticon City to capture Dr. Arkeville and rescue Typhoon. He later provided additional support for the rescue of Benin-Jeri and his medical staff from Decepticon-occupied Autobot City's repair bay.

In May 2015, Autobot City was rocked by a large explosion. It was soon revealed that an explosive device was placed inside the city,most likely during the Decepticon occupation of 2014. Jetfire was accused of planting the device, based on an audio communication with the Decepticons picked up by Blaster, and a previous on-tape encounter, discovered by Red Alert, and explosive residue found on his armor. As he recovers from his injuries sustained in the blast, Jetfire's status as Air Commander has been removed. Silverbolt has been named interim Air Commander.

For four months, Jetfire was imprisoned on Cybertron. He was defended by Ultra Magnus, while Elita One led the prosecution. Judge Tyrest oversaw the proceedings. Elita One laid out a damning case against Jetfire. However, the jury reached a verdict of not guilty after hours of deliberation. While the verdict spared Jetfire's life, he was still troubled that he was found not guilty, but not exonerated for the crime.

When the Decepticons attacked the Three Gorges Dam in 2016, Ironhide and Jetfire responded. In March of 2016, Blaster and Jetfire responded to a Decepticon attack on a generator in Jamaica. Jetfire engaged Starscream while Blaster deployed Rosanna and Flipsides to help deal with Slugfest and provide protection for the humans who had not yet been evacuated.

Towards the end of the war, Decepticon Air Commander Valour found what he thought was the dead body of Jetfire. Jetfire, however, fought back from being scavenged. Years later, Jetfire turned back up, but Valour has yet to be seen, and may have died from his encounter with the Autobot Air Commander.

Jetfire's weakened, shivering form appears on the screen. "I am voluntarily sequestering myself right now. But I've been able to deduce some information about this... contagion I've contracted. It is a rare strand of communicable disease that affects Transformers. I've done some preliminary analysis and it looks like... well, the STRANDS of what I've been able to glean appear to be... extremely ancient. Possibly before we even discovered the technology to transform. *violent cough* I'm still unsure if it is airborne, or physical contact is needed - but in the meantime, if you see Windshear, do NOT engage him. Use only long-range weapons. Also... there MAY be some slight psychosis-related effects, so be forewarned. I will continue my investigation for as long as I can. Jetfire out."

Blaster and Spike discuss Hubcap's recent weird behavior, then attempt to help Jetfire and others affected by the Dweller virus

>*Jetfire's face comes on the screen*< Fellow Autobots, the time is approaching where the portals to our 'other universe' counterparts are going to close permanently. As redundant as this may sound, I am asking that ALL Autobots report in before we close the final portal. It may seem like an unnecessary step, but I would hate to have any of you on the other side when the final portal closes, because once this is close - there may never be a time again when they can be reopened. Just an added precaution. Jetfire out -

The Seacons are tasked with a devious mission in the Ring of Fire.

The Dweller has been lured to the Quintessons' Space Bridge Hub and has taken his revenge. The destruction has fed back through the Space Bridge network, destroying all the Spirals, save for the Bellum. Cut off from their allies, the Quintessons mount a fierce defense against Earth's last assault against them.

Emperor Prime and his band of Shattered Glass Autobots make an assault through the last remaining portal linking their world and the main one.

<Jetfire's face appears onscreen, and while the face is hard to read, a look of unease is projected> Fellow Autobots - we have unofficial reports from Cybertron that Megatron, leader of the Decepticons, has perished. I caution everyone in breaking out the celebration energon. These are very preliminary reports. We do not how how he perished - if these reports are true. Also, I strongly doubt that this will end our seemingly endless war with the Decepticons. It is well known that their leadership pool runs deep, and many have made their intentions of leading the Decepticons. My best advice is to keep following reports from Cybertron and hope that more information comes forth. Jetfire out <screen fades to black>

A large blast tears through Autobot City. Could Jetfire be behind it?

May 09 - Successful Campaign Against the Decepticons

Jetfire is now played by Spike.