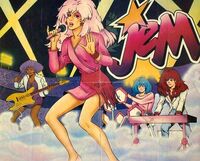 JEM, AKA JERRICA BENTON, is the owner of Starlight Music, and in the 80s was the leader of a glam band and the most popular singer of her day. Now she works mostly behind the music, producing up-and-coming artists, focusing primarily on female acts. Jerrica's other main concern is Starlight House, a home for foster girls. A portion of Starlight Music’s profits go towards the Starlight Foundation, which supports the Starlight House. Starlight Music is known for its advanced audio, visual, and entertainment technology, and its research and development division owns many profitable patents in holographic and synthesizer technology.

On June 1, 1966, Jerrica Benton was born to Jacqui and Emmett Benton. Jerrica is the eldest child of Emmett and Jacqui Benton and grew up with her sister Kimber at the Starlight House. At age ten, Rio and his family moved in next door to the Bentons and Jerrica developed a crush on him instantly. Aja became Jerrica's foster sister when they were twelve and Jerrica originally disliked her, although later they overcame their differences. Later that year, Shana moved in with them. Also in the same year, the Bentons built a treehouse for the girls, and they made a pact to stay friends forever.

When Jerrica was still 12, she got angry at her mother for being away frequently from her family and she lashed out at her. That same day, Jacqui Benton died in a plane crash. A month later, Jerrica convinced her father to transform Starlight House into a foster home. Afterward, Deirdre and three other Starlight Girls moved in.

When Jerrica was 17, her father hired Eric Raymond as an assistant and Jerrica developed a small crush on him. She used Eric to make Rio jealous, but she regretted it very quickly. Jerrica apologized to Rio, both made up and eventually started dating.

When her father died, he left a supercomputer/synthesizer for her, known as Synergy, which he built by himself, along with various costumes and musical equipment. Jerrica decided to form a band called Jem and The Holograms to take Starlight Music away from Raymond, using her father's inventions.

Jem returned from obscurity for a special Holograms-reunion USO show for US troops. Unfortunately, Cobra attacked during the show, capturing Jem and the Holograms, and held them for ransom until Rio turned over some of the Holograms' advanced holographic technology. However, without Synergy to run them, Cobra's holograms will never be as lifelike and convincing as Jem's.

In 2021, Jerrica Benton announced a new Holograms tour fronted by Jem, in support of a new album.

When the Holograms performed in 2022, they introduced a new, darker, hypnotic sound. It immediately spread like wildfire but seemed to have a negative effect on those listening to it.

For the Jem TP, Jem was played by IceSpark. However, she is now available for application.