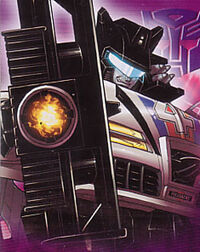 "Destroy it with style or don't bother destroying it at all!"

Autobot Jazz and his brother Ricochet served as Optimus Prime's powerful and merciless bodyguards. While the Seeker unit is designed to hunt down and destroy targets, Jazz and Ricochet stayed with Optimus Prime to protect him against any and all threats. Jazz was one of Optimus Prime's most loyal and trusted aides. He only wished to serve the glorious future that Optimus laid out for the Autobots and he was completely convinced of his cause. In 2004, Jazz intercepted a series of transmissions from a planet called Earth. While garbled, he managed to decode and translate enough to become enamored with the planet's culture. As a result, he gave himself a new design pattern based on a Bugatti Veyron mid-engine sports car with his own special modifications. Everything he does has to be with style, from talking to simply transforming. While Optimus Prime found this behavior strange, he allowed Jazz some latitude from standard Autobot military practice as long as he remained loyal to him. However, with Jazz's defeat at the hands of Jetfire, he finds himself exiled and declared a traitor to the very cause to which he'd dedicated his life.

In robot mode, Jazz can use his solar-powered photon rifle with deadly accuracy up to a distance of .9 miles from target, and he can shoot it from virtually any physical position he may be in with equal effectiveness. He can also use a combination of his overhead flame-thrower (maximum range of 250 feet), full-spectrum front grill beacon and 180 dB stereo speakers to create a spectacular, disorienting light and sound show. He has shoulder-mounted missile pods he can also use in car mode. He has been known to glide for more than 3000 feet using his rear-mounted ailerons. His biggest asset is the versatility and cleverness he possesses in using the resources at his disposal.

Although Jazz's firepower and strength are weak relative to that of some of the other Autobots, he more than compensates with his daring and skill. He's prone to be distracted from his primary assignment by Earthen behavior patterns that he finds interesting. This sometimes leads to disastrous consequences. Jazz also has a fear of heights and of flying in transports and shuttles, a secret he tries to keep hidden so no one can see the cracks in his cool demeanor. Now that Jazz has been declared a traitor, he also haas to contend with the fact that any Autobot he meets is liable to try to capture or kill him.

In 2004, Jazz intercepted a series of transmissions from a planet called Earth. While garbled, he managed to decode and translate enough to become enamored with the planet's culture. As a result, he gave himself a new design pattern with his own special modifications.

Jazz came to Earth on the Ark with Emperor Prime, and with Jetfire's capture by the Decepticons, took over the role of Autobot XO.

When Jetfire returned to the Autobots, Prime for his own reasons reopened the position of Autobot XO, despite Jazz having done nothing to merit losing this role in the first place. Prime decided that Jetfire and Jazz fight to the death. The winner would get the Autobot XO title. The loser...wouldn't.

In 2011, in front of Autobot spectators, Jazz and Jetfire did battle. The tide shifted repeatedly throughtout the battle until Jetfire came within one or two attacks from ending Jazz's life. Sensing defeat, Jazz disappeared midway through the fight and fled the combat arena. He has not been heard from since.

Jazz is a big fan of country music.

Jazz is temped by Bzero.