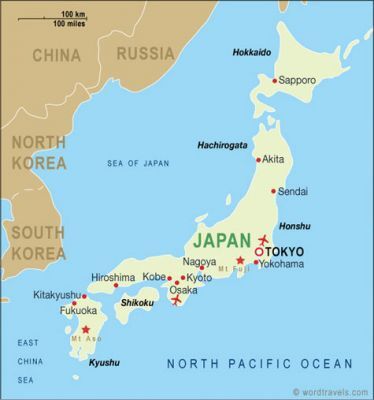 Japan (日本 Nihon or Nippon, officially 日本国 - Nippon-koku or Nihon-koku) is an island nation in East Asia. Located in the Pacific Ocean, it lies to the east of the Sea of Japan, People's Republic of China, North Korea, South Korea and Russia, stretching from the Sea of Okhotsk in the north to the East China Sea and Taiwan in the south. The characters which make up Japan's name mean "sun-origin", which is why Japan is sometimes identified as the "Land of the Rising Sun".

Japan comprises over 3,000 islands making it an archipelago. The four largest islands are Honshū, Hokkaidō, Kyūshū and Shikoku, together accounting for 97% of Japan's land area. Most of the islands are mountainous, many volcanic; for example, Japan’s highest peak, Mount Fuji, is a volcano. Japan has the world's tenth largest population, with about 128 million people. The Greater Tokyo Area, which includes the de facto capital city of Tokyo and several surrounding prefectures, is the largest metropolitan area in the world, with over 30 million residents.

Archaeological research indicates that people were living on the islands of Japan as early as the Upper Paleolithic period. The first written mention of Japan begins with brief appearances in Chinese history texts from the first century A.D. Influence from the outside world followed by long periods of isolation has characterized Japan's history. Since adopting its constitution in 1947, Japan has maintained a unitary constitutional monarchy with an emperor and an elected parliament, the Diet.

A major economic power, Japan has the world's second largest economy by nominal GDP and the third largest in purchasing power parity. It is also the world's fourth largest exporter and sixth largest importer. It is a developed country with high living standards (8th highest HDI) and the longest life expectancy in the world (according to UN estimates).

Later that year, Megatron created a pint-sized lifeform of pure energy that's capable of absolutely ruining any machine it can get into. It was called... I think Kremzeek. Thrust deposited Kremzeek outside of The Ark, where it quickly infiltrated almost every Autobot and scrambled Teletraan One. Sparkplug managed to coat Optimus Prime with a protective foam that prevented Kremzeek from entering him. This enabled Prime to take the few Autobots not damaged by Kremzeek to go to Japan, where Kremzeek traveled to via Sky Spy.

In Japan, Blaster managed to capture Kremzeek in his chest panel and proceeded to "fry" the little bugger. However, since Kremzeek feeds on electricity, this only resulted in more Kremzeeks being created. The Autobots then went on a city-wide search for the Kremzeeks, who were wrecking havoc on Japan. Realizing the only way to effectively combat the Kremzeeks was to lure them to an energy source, the Autobots constructed a massive electrical station that lured all the Kremzeeks into it, creating a huge Kremzeek.

While this was going on, Megatron created another device - an energy magnet that was capable of sucking the energy out of every mechanical object (including Autobots) and sending the energy directly into their undersea base. Blaster comes up with the idea of sending the Kremzeek to the energy magnet. While feasting on the energy magnet, the Autobots engage in a brief philosophical talk (mainly led by Bumblebee) about whether they have the right to kill a life form. Prime says Kremzeek is too dangerous and does the dirty work by aiming a dispersement ray at Kremzeek and in firing it - dispersing the pure energy that made up Kremzeek, effectively killing it (Prime had to shield his eyes while doing it, proving he's still a softie at heart). While Bumblebee says he misses the little bugger, a lone Kremzeek appears and wrecks some havoc around the Autobots and heads off to downtown Japan - forcing the Autobots to run after the troublemaker.

In 2004, the Terrorcons where reported as working out of Japan.

In 2011, Dr. Fujiyama was hired to build robots to help safely decontaminate the Fukushima Daini Nuclear Power Plant‎‎ after the 2011 Tōhoku earthquake and tsunami.

In 2013, the Fukushima Daini Nuclear Power Plant was attacked by Decepticons. Scrapper and Long Haul made off with quite a bit of equipment from the reactor itself. Most of Dr. Fujiyama's robots were captured or destroyed. Later that year the USS FLAGG was assigned to patrol the waters surrounding Japan in a joint US-Japanese effort. However, the Flagg was attacked by Piranacon and destroyed, and its burnt, shattered remains rest on the bottom of the Japan Trench.