This article is about the son of the original commander of the Joe Team - for his father, see General Flagg. For his evil Shattered Glass universe counterpart, see Jimmy Flagg (SG). 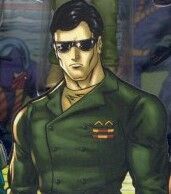 GENERAL FLAGG is the son of the original G.I. JOE team commanding general. He is a graduate of the Virginia Military Institute, as were five preceding generations of Flaggs. GENERAL FLAGG shares the same philosophy as DUKE of personally leading his troops into a firefight instead of sending out orders from behind the lines in some cozy commander’s tent. When the call is given to charge, he’s the one shouting it from the front. His strategies on the battlefield have twice earned him the Medal of Valor and countless decorations as he carries on his family’s proud military tradition.

GENERAL FLAGG is the son of the original G.I. JOE team commanding general. He is a graduate of the Virginia Military Institute, as were five preceding generations of Flaggs. His strategies on the battlefield have twice earned him the Medal of Valor and countless decorations as he carries on his family’s proud military tradition.

In November of 2009, Flagg was asked by General Hawk to step in and take command of the G.I. Joe Team until Hawk himself could return from Washington.

Jan. 2010: Lifeline requests a leave of absence from The Pit infirmary duties, in order to accompany Doctors Without Borders to Haiti, to aid in earthquake disaster relief. Excerpt from his leave request: "Please consider my request for a leave of absence. Yesterday, I was contacted by Dr. William Sanchez of Doctors Without Borders. He's assembling a team of physicians in Miami, Florida, who are about to travel to Haiti to assist with the earthquake victims. The situation in Haiti is dire. The United Nations has pulled their physicians from the country due to security concerns. There's been looting, there's corpses strewn all over the city, and the injured have nowhere to go. I feel this is my calling, and would like to remain in Haiti until the situation has stabilized...as far as the infirmary staffing in my absence is concerned, I have given this serious consideration. Doc Greer is my first choice, should she be available to fill in for surgical duties. I also have a lot of faith in the abilities of Evac and Stitches, who have proven themselves time and again to be able to handle the daily duties of running in the infirmary...Thank you for your consideration."

During the worldwide flood crisis in 2011, Hawk returned to the field to take command, and Flagg returned to the Pit to operate there with the skeleton crew that remained after the base was sealed.

When the Earth was largely restored, Hawk returned to the Pit to resume command, and Flagg resumed a support role.

Although his filecard lists his name as James Longstreet Flagg III, "the Third" names don't work like that. For him to be Flagg the Third, he'd need the same first and middle names as his father, Lawrence J. Flagg (who must actually be Lawrence J. Flagg, Jr.) To maintain the name James and the continuity of the original General Lawrence Flagg, on the MUX both characters are named Lawrence James Flagg.

General Flagg is currently temped by BZero, but is available for application.