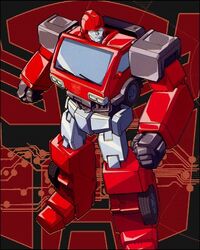 "Go chew on a microchip," is Ironhide's calling card. Never the sort who likes to be told what to do, he prefers action to words. He refers to what he considers excessive talking as "leaking lubricant." He's one of the oldest Autobots, probably the toughest, most battle-tested and certainly the orneriest. Due to his defensive capabilities, he is usually in charge of safekeeping anything or anyone of importance, and sort of acts as General Hawk (GW)'s personal bodyguard. His gruff exterior hides his kind inner soul; his concern for the protection of life, whether mechanical or biochemical, extends to the lowliest gasketroid or smallest sparrow.

Ironhide's skin is made of a trithyllium-steel alloy impregnated with irradiated carbon fibers, giving him immunity to most forms of artillery and electromagnetic attacks. He is the most nearly invulnerable of the Autobots. His main weapon is what he playfully calls his "water gun." It can shoot a stream of any number of liquids up to 1,000 feet. His choices include supercooled liquid nitrogen, superheated liquid lead, and a petro-chemical fluid that ignites upon contact. He also has sonar, radar, and a radiowave detector.

Ironhide is one of the slowest Autobots. Due to his advanced years, he one of the Autobots that breaks down the most, especially in his Hammer mode. His presence breeds dissension among some of the younger, less compassionate Autobots who consider him an antiquated old heap whose contributions do not outweigh his liabilities. Hawk (SG) does not share their view.

Ironhide was part of the bridge crew of the Ark when it embarked on its fateful voyage to seek out new sources of energy beyond Cybertron four million years ago.

When G.I. Joe discovered the Ark and started reviving the Autobots, Ironhide was rebuilt into a Hammer.

In 2014 (GW), when Falcon temporarily took over the Ark Project, Ironhide threatened to quit the Ark Project and kick G.I. Joe out of the Ark. Sparkplug had to talk him down, and Ironhide relented when Flint (GW) returned and put Sparkplug and Spike back in charge of the program.

However, when Code Buster released documents showing G.I. Joe's overreach in global security (to put it mildly), Ironhide did finally kick the Joes out of the Ark, allowing only Spike and Sparkplug to return.

For the Joe World TP, Ironhide was @emitted by SpikeWitwicky.

Retrieved from "https://tfumux.fandom.com/wiki/Ironhide_(GW)?oldid=60460"
Community content is available under CC-BY-SA unless otherwise noted.