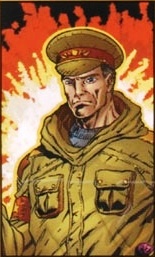 IRON BEAR is the OKTOBER GUARD General and their best kept secret. He is an experienced war veteran with detailed knowledge of military strategies, battles, locations, vehicles, armaments, and noteworthy soldiers. He is a very wise and confident leader, yet humble around his soldiers. It is rumored that he has amassed a sizable collection of war memorabilia, but no one knows where it is kept. Although he commands his elite team behind the scenes, there are occasions when he must leave their secret headquarters to protect and serve the interests of Mother Russia.

IRON BEAR has spent years avoiding attempts on his life from traitorous double agents within the Soviet army. However, he has learned to stay one step ahead of the enemy and always keep on the move. It may be a neverending task, but he proudly directs his elite special missions team to strike at them until the very last man is standing.

In 2012, Iron Bear was put in charge of the Oktober Guard. In 2017, he tried to stop the assassination of Vladimir Putin, but failed. In 2018, he helped drive off an attempted Cobra attack on the Moscow Kremlin, with the help of G.I. Joe agent Sinatra. Later that year he witnessed Cobra's exposure to the world of Putin's death.

General Iron Bear is the current commander of the Oktober Guard. He was an ally of G.I. Joe in the War Against Terror until the Russian invasion of Ukraine.

Iron Bear is available for application. In the meantime, he is temped by Bzero.

Retrieved from "https://tfumux.fandom.com/wiki/Iron_Bear?oldid=69509"
Community content is available under CC-BY-SA unless otherwise noted.