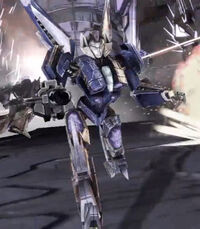 "Above the belt? Below the belt? I don’t care as long as I hit!"

Ingenue may be small but she makes up for it with devout ruthlessness. She was once a young, idealistic neutral from Crystal City. But after centuries of seeing the evil Autobots destroy her friends and home world, she joined the Decepticon cause with all the zeal of a convert.

Her T-33 Shooting Star alt mode is slow but highly maneuverable and equipped with two .50-cal. machine guns in its nose. In battle, Gen uses her holographic emitters to lure Autobots into traps before striking.

Ingenue works hard and plays hard. The life of a warrior is short and she plans on going out with a holler and taking as many Autobots with her as she can.

Gen was once a young, idealistic neutral from Crystal City. But after Optimus Prime ordered her home city-state destroyed, she joined the Decepticon cause with all the zeal of a convert.

When the TP began, Gen was stationed in Skymount, preparing to assist with the assault on the Ark's launchpad. When the Ark and the Nemesis launched, Ingenue was left behind, and continued to serve the Decepticons under Cyclonus, although she is more than unhappy with his truce with the Autobots. With the banishment of Starscream and Windshear for their alliance with the Autobots, in 2013 Ingenue was made XO of Decepticon Aerospace.

In preparation to going to Earth, her altmode was changed to a Lockheed T-33 Shooting Star.

Ingenue was created and played by Dyliana.

In the Shattered Glass universe, Gen is a hard-assed, violent, not-so-nice heroic Decepticon.

Instead of a Cyber where everyone was sorta down the middle and had their own good points about the war (like she was conceived for) The Autobots were evil and the cons were just not really getting it done so she believes you have to be more ruthless with evil doers. And that the time for talk is over!

Too bad her bf is a coward!

Ingenue ... instead of being the sweet ingenue she's the film-noir she-devil.

Retrieved from "https://tfumux.fandom.com/wiki/Ingenue_(SG)?oldid=48236"
Community content is available under CC-BY-SA unless otherwise noted.