Start a Wiki
The name or term Inferno refers to more than one character or idea. For a list of other meanings, see Inferno (disambiguation). 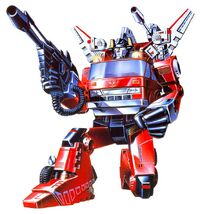 "The hotter things get, the better I like it!" When Inferno says this, he's not merely referring to fires. His love for combat increases with its intensity as well, a fact appreciated by both friend and foe alike. Although his primary role is search and rescue, performing it usually takes him into the heat of battle where he is often distracted into participating. If Optimus Prime has any complaint about Inferno, it's that he doesn't stick to his assigned task. But that's because he wants to do too much, not too little, and Optimus can't really complain about that.

In a Japanese Mitsubishi Fuso firetruck mode, Inferno has all the capabilities of a normal Earth fire truck. In robot mode, Inferno's strength is among the greatest of the Autobots. His ceramic-plated armored skin makes him resistant to temperatures of up to 8000° C. His extinguisher rifle not only shoots a stream of flame-suppressing foam, but can also stop beams of various types of electromagnetic radiation with its own energy-damping beam. By detaching his hands, he can use his forearms to launch short-range surface-to-air missiles.

Inferno isn't too good at following orders, which can lead to problems in performing his job as well as on the battlefield. His particular configuration makes him one of the least mobile of the Autobots when he's in robot mode.

Inferno arrived on Earth during the initial impact of the Ark into the planet. He had been present when the Ark crashed onto prehistoric Earth during the encounter wih the Nemesis, but due to being in the more heavily-damaged Ark belowdecks, he was not recovered and repaired for almost a year.

Inferno appeared without explanation one day as Optimus Prime explained their mission to stop the Insecticons from attacking the Nova Power Plant. He was the first to roll out on Prime's orders. During the battle at the power plant, the gun-slinging firefighter stood by Jazz and shot down Laserbeak before they rushed off to rescue the human pilots of a downed helicopter. After the super-powered Insecticons crushed Wheeljack and electrocuted Ironhide, Inferno sprayed fire-retardant foam on Ironhide and loaded him into Prime's trailer as the Autobots retreated. Inferno later participated in the Autobot counter attack at Iron Mountain where he and the other Autobots were buried under tons of rock. Hound was heard to complain about Inferno ending up on his head whilst they were trapped.

Later, Inferno did his part to preserve the sanctity of the timestream by spraying cowboys with fire retardant foam. Eh...you had to be there.

Later, Inferno was ordered to guard over Red Alert as the Autobots repelled an attack by the Decepticons on the Negavator super weapon's bunker. Inferno, itching for a fight, abandoned Red Alert despite his paranoid friend's repeated requests for him to stay. Inferno rescued Red Alert when his friend was buried under rubble which had the unfortunate side-effect of damaging Red Alert's logic circuits to the point of overload. Inferno later proved his friendship to Red when he saved Red Alert from himself when the latter, in a state of paranoia, allied himself with Starscream and the Decepticons.

The Search for Alpha Trion

Inferno was reunited with his old friend Firestar when he, Ironhide and Powerglide went to search for where Optimus Prime had wandered off to.

Inferno was in one of the Autobot teams that captured the Stunticons. While Grapple ignited the oil Breakdown and Wildrider were in, Inferno doused it (something he "wouldn't feel good about" when he did it) to help capture the stunt freaks. He was, eventually, among those Autobots taken down by Menasor when the Stunticons formed into him to escape.

Inferno is on Earth, currently assigned out of Autobot City. In 2013 he was active in search and rescue efforts in cities controlled by the Quintessons, both during and shortly after the invasion.

'As of right now any of you who are providing your own fields to help boost Iacon's defenses need to be checked every other cycle. If your system have signs of wear it will be repaired on the spot. If this wear is determined to be beyond normal for the amount you have been using those systems you will be temporairly removed from this duty while they are repaired and for at least another cycle after that, per the medical staff's decisions.

Inferno is played by Anher.

Retrieved from "https://tfumux.fandom.com/wiki/Inferno?oldid=77227"
Community content is available under CC-BY-SA unless otherwise noted.