This page is for the Weatherbot. For the Cobra jet, see Hurricane VTOL. 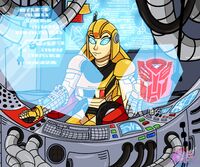 The main character flaw of HURRICANE has to be the time she wastes chattering. A bit of a Valley girl, she can usually be found playing with her communications equipment, accessing chat lines, the Internet, or anything else she can find a way into which to hack or uplink. As the Weatherbots' communications expert, her abilities are necessary for the team to work properly in the field, which is why it is often a source of great annoyance for the others as they try to get her to cease her constant chatting. She isn't fond of combat, and would prefer to stay home and chat with all her friends from around the world than go out and do things that might require work. She tries to make up for this with her infectiously cheerful personality. She transforms into a Land Rover Discovery. Sometimes considered the 'twin' of Typhoon, she and her 'sister' are both are Land Rovers of nearly identical design. Built to withstand powerful coastal storms, Hurricane is heavily armored, with a specially modified suspension. She is armed with a whirlwind gun in robot mode, as well as a standard Weatherbot laser pistol. In truck mode, she is equipped with a ram plate and a towing winch. Her vehicle form is also armed with a top-mounted rocket launcher. As left leg/foot module, she merges with the other Weatherbots to form F-5. Her unwillingness to ever leave the Comm Tower sometimes impedes her relationship with her Weatherbots sisters.

Hurricane was Built in 1997 by Wheeljack.

When Stormwind formed F-5 to defeat the Quintessons in 2013, she infected the other Weatherbots, including Hurricane, with the Dweller virus.

In 2014, First Aid was able to reverse the effects of the Dweller virus on the Weatherbots, using a modified version of the cure developed by Jetfire and Starscream.

In 2020, Hurricane and Mesocyclone were again taken over by the Dweller virus. They stole a shuttle full of energon and disappeared.

Hurricane is the physical twin of Typhoon, although their personalities are very different. When she was first built she had a long trailer, but she was later rebuilt without the trailer, sacrificing some mass in exchange for greater maneuverability.

Hurricane's IC persona was defined by dunmurderin, and she is often temped by Bzero (who plays Typhoon). She's also been temped by Mynoris. In 2019, Hurricane was taken over by Agollo. However, Hurricane is very available for application.

In the Shattered Glass universe, Hurricane is a tight-lipped field communicator, uninterested in small talk.

In the Cobraverse, Hurricane had her core removed and was rebuilt as a Cobra Stinger for use by the Tele-Vipers.

In the Joeverse, Hurricane and Typhoon were built by G.I. Joe as VAMP IIs. Although they are the latest in human AI technology, they are still little more than glorified androids.