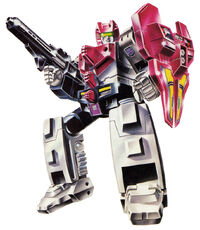 HUN-GRRR has two mouths to feed -- his own -- and spends most of his time doing so. Since his mouth is usually full, his orders are often misinterpreted. He prefers eating non-living to living things, as he doesn't like the idea that something might still be wriggling about after he swallows it. In two-headed dragon mode, he can refashion digested materials into crude missiles, and spit them out at his opponents. He has a powerful sonic stun gun in robot mode, as well as incredible strength, tireless endurance, and limitless courage. He leads his fellow Terrorcons with cunning intelligence and determination, and can combine with them to form Abominus. A nearly unbeatable foe, Hun-Grrr is one of the Decepticons' greatest warriors.

The Terrorcons were among the many Decepticons under the command of Shockwave on Cybertron.

During the Dweller's assault on Polyhex in 2012, Hun-Grrr and his Terrorcons were turned into energy vampires and forced to the Dweller's will. Captured by Cyclonus in 2013, he was eventually cured by Starscream.