This page is for the main-universe Autobot pessimist. For his creepily-positive Shattered Glass counterpart, see Huffer (SG). 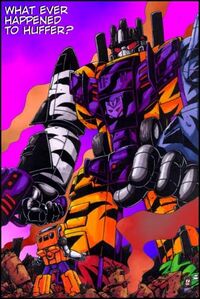 Many Autobots say HUFFER looks at the world through sludge-colored windshields. Huffer is dour; he says very little and when he does speak, it's usually to grumble and complain. Huffer's pessimism extends even to his job specialty; he'll grumble that it can't be done and that it's impossible - and then build the most complex mechanized device imaginable. Sometimes it seems he can whip up a suspension bridge out of bobby pins and glue. Huffer isn't too sociable, but in any sort of difficulty he is absolutely reliable. He can be prone to severe bouts of depression as a result of his homesickness for Cybertron. A complex system of sensors in his arms allow Huffer to test various materials for tensile strength, heat resistance, elasticity, and other attributes for use in construction. Although he lacks weaponry, he is extremely strong and can lift 40,000 pounds. His mathematical and geometrical abilities exceed those of most of the other Autobots.

Huffer was part of the original crew of Ark-based Autobots who crashed on Earth four million years ago. In 1984, he awoke and was reformatted into a mini semi truck cab. An engineer and not a warrior, Huffer loathed combat and hated being stationed on Earth, as he longed to return to Cybertron. Optimus Prime would often have to motivate Huffer, reminding him to remain courageous in the long fight. More than Meets the Eye, Part 1 During one of the first engagements on Earth, in which the Autobots attempted to stop the Decepticons from attacking an off-shore oil rig, Huffer was trapped in the debris. Brawn came to his rescue, cutting Huffer loose from the wreckage.

Huffer was also part of the disastrous attempt to stop the Decepticons from raiding Sherman Dam, and was on the mission to the ruby crystal mines of Burma. More than Meets the Eye, Part 2 Damaged in a fall from the top of the mines, Optimus Prime was encouraged by Huffer, Cliffjumper, and Gears as he painfully tried to transform back into robot mode. Huffer and the rest of the Autobots later rolled out in a last-ditch attempt to prevent the Decepticons launching their new space cruiser. More than Meets the Eye, Part 3

After Optimus Prime was severely damaged in a Decepticon attack, Huffer didn't rate their leader's chances very highly. Laserbeak damaged Prime further, and it turned out that the replacement part they needed was on Cybertron, prompting yet another pessimistic comment from Huffer, which was stifled by Ironhide. He got his chance to complete the sentiment later, when they discovered that the full Decepticon force was about to attack, and Prime was still down. Spike Witwicky's subsequent show of determination inspired Huffer, and he led the other Autobots in defending the base, decking Thundercracker with a single punch. Divide and Conquer

When Optimus Prime authorized Wheeljack and Ratchet to build robot dinosaurs, Huffer insisted that this was a waste of time. After the Dinobots were completed and unveiled, Huffer remarked, "Dinobots? I thought you were supposed to make Dinosaurs!" and laughed. This was followed by an awkward silence. S.O.S. Dinobots Despite the problems they had with the first three, Huffer took part in the building of two more — Snarl and Swoop. War of the Dinobots

After Spike repelled a Decepticon attack on Autobot Headquarters by dousing the invaders in fire-retardant foam, Huffer and Brawn were stuck mopping up the mess. The Ultimate Doom, Part 1 The volcano in which Headquarters rested became active as a result of Cybertron being brought into Earth's orbit, and Huffer, Windcharger and Ratchet were expelled from it in a fiery eruption. They were saved by the timely intervention of Skyfire, who caught them on his jet mode. The Ultimate Doom, Part 2 Following Cybertron's departure, Huffer took part in cleanup efforts, but wasn't too busy that he couldn't razz Gears. Countdown to Extinction

Like the rest of the Autobots, Huffer turned out to watch Optimus fight Megatron. After Prime's shock loss and with their leader struggling to transform, Huffer was helpful enough to tow Prime's trailer back to the base. Prime told Huffer that he was a true friend. But then, Prime considers all the Autobots his friends, so that might not have been saying much. Heavy Metal War Huffer rolled out a couple more times — to save some gold miners, and to thwart Megatron's Solar Needle plan. Changing Gears During the first attempt to demonstrate the Immobilizer, he hit the deck with the rest of the Autobots when Ironhide started shooting wildly at Hound's holographic Laserbeak. The Immobilizer

Later, Huffer denounced Spike and Chip's idea for the Autobots to participate in a charity race and stayed at the base with Wheeljack, Ratchet, and Brawn. His bad feelings turned out to be well founded when Megatron used the Transfixatron to lock the Autobots in vehicle mode. Huffer's dour attitude was so annoying that Brawn nearly bear-hugged him to death. He still took part in the rescue mission to save the rest of the Autobots. The Autobot Run

Huffer was one of the Autobots confronted with the conundrum that they had two Optimus Primes. After a series of tests, the Autobots were no closer to working out which was the real Prime, and at any rate had more urgent problems, as they'd detected strange energy readings from a crevice. During a battle with the Decepticons at the crevice, one of the Primes destroyed Starscream, and Huffer pronounced him the real deal. As Optimus led them towards the crevice, they encountered Windcharger, who had discovered it was full of deadly korlonium crystals. That and his disregard for Spike's safety betrayed the false Prime, and the Autobots blasted him. A Prime Problem

After Bumblebee returned to Autobot HQ with Powerguide from a newly discovered island, Huffer was among the Autobots who listened to his report. A debate ensued about the abilities of the Dinobots versus real dinosaurs. Huffer taunted Wheeljack when the Autobot scientist claimed that the Dinobots had been practicing their powers, declaring them complete dino-klutzes. The Dinotbots immediately demonstrated their attempt at “finesse” and proved Huffer right. Dinobot Island, Part 1

Later, Huffer wondered why Spike was still interested in dinosaurs after his numerous near-death experiences on Dinobot Island, when Teletraan I sounded an alarm. Huffer complained that the alarm must mean bad news. He went with the team to investigate a time disturbance in the nearby city and was proven right.

Huffer and Optimus Prime were the first on the scene and discovered that city traffic was clogged for an unknown reason. Hound detected Bumblebee’s signal under a pile of rubble, and Huffer hurriedly moved in to clear the rubble away. He had to duck out of the way of flying debris when Sideswipe used his pile driver hands to speed up the job. When confronted by the time-displaced barbarians riding woolly mammoths, Huffer wondered if they were new Earth forms the Autobots hadn’t seen yet.

Optimus ordered the Autobots to stop the random destruction caused by the mammoths and Huffer responded by wrestling one into submission, while declaring himself one of the strongest Autobots. He, Sunstreaker, Sideswipe, Hound and Ironhide herded the mammoths into Prime’s trailer, and then into the closing time portal. When the portal closed, Huffer breathed a sigh of relief, remarking that he thought they’d never leave. Dinobot Island, Part 2

The Autobots went to South America and were confronted by Megatron rendered ultra-powerful by the Heart of Cybertron. Huffer desperately tried to charge Megatron in a moment of uncharacteristic optimism, only to be blasted. He and the other Autobots limped back to Headquarters. Microbots

Huffer took part in the Autobot Day parade and was in the Mayor's office when Megatron's faked video was played, incriminating the Autobots in energy theft. The Autobots were subsequently found guilty by a court of law, and Huffer found himself sitting between Gears and Brawn on a spacecraft headed away from Earth. Megatron's Master Plan, Part 1 When Ironhide started complaining about their situation, Huffer joined gamely in. Unfortunately, though Prime did agree he'd made a mistake, they were unable to change their flight plan, as the ship was locked on course for the Sun. It took Cosmos and the use of Trailbreaker's force field to get them back to Earth. Megatron's Master Plan, Part 2

When Megatron used the Voltronic Galaxer to block radio signals worldwide, Huffer was among the Autobots who rolled out to help the humans. Blaster Blues He also took part in sting operations in New York City in an attempt to catch car thieves. He and Hoist observed that Tracks seemed to prefer the company of humans. Later, Hoist was driving Huffer when they encountered a traffic jam and helped clear it. Huffer also fought Decepticon drones downtown alongside Ironhide and Windcharger, and was part of the assault on the Decepticons' drone manufacturing facility. Make Tracks

After a number of the Autobots and Decepticons were lost in a space bridge incident, Huffer watched Chip Chase unsuccessfully try to use Teletraan I to locate them. Child's Play He was part of an equally unsuccessful mission to try to fight the Insecticon clone army. While he was being repaired, Cosmos, Bumblebee and Spike were bringing robotic insecticide back from Floron III. Unfortunately, they also brought back Morphobots, and Huffer was on the mission to rescue Cosmos from under the alien vegetation, though as usual, he didn't do much other than complain. Quest for Survival

When Megatron sent Kremzeek to the Autobot base, Sparkplug Witwicky discovered that an insulating compound would protect the Autobots. However, by this point, Huffer had already fallen victim to the little electronic pest. Kremzeek! After Tracks and Bumblebee were kidnapped by big game hunter Lord Chumley, Huffer was one of the Autobots who scoured the city for them. Prime's call to return to Headquarters came just in time for him to avoid unsuspectingly being trapped himself. Prime Target Huffer didn't provide any input when the Autobots came up with a plan to disguise themselves as Stunticons in order to uncover Megatron's latest plan, though he ended up having to go pull their fat out of the fryer when they were inevitably discovered. Masquerade

Huffer is often the subject of pranks played by the Autobot Dust Devil.