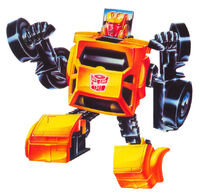 HUBCAP functions as the Radar O'Reilly of the Autobot forces. He has everybody's friendship but nobody's trust. He is affable, witty, generous, even charming -- it is no wonder that his fellow Autobots find him such pleasant company. But he's also a con artist. He is likely to enthusiastically accept some work detail one moment and then try to sucker someone else into doing it the next. Or he might try to smooth talk a comrade into trading his weapon for an inferior one. HubCap is surprisingly effective at his scams. Perhaps it's the smiling, sincere way he talks or perhaps it's because he looks small and unthreatening. Whatever the case, HubCap is living proof of the old Cybertronian adage, "You can't tell an Autobot by it's finish."

Not only is HubCap adept at speaking, he's even better at listening. Equipment within his head module allows him to receive a broad spectrum of electromagnetic signals -- AM and FM radio, shortwave, UHF and VHF television broadcasts. He uses his phosphorescent windshield as a television screen when receiving TV signals. Amplifying circuits allow him to detect signals as weak as .000001 watts. His audio circuitry can hear a pin drop 500 yards away, and has a frequency range of 5 to 50,000 Hertz. In Porsche 924 Turbo mode, he can travel up to 90 mph and has a range of 1000 miles.

HubCap is physically among the weakest of the Autobots. Even low-speed crashes can result in severe damage to his body. 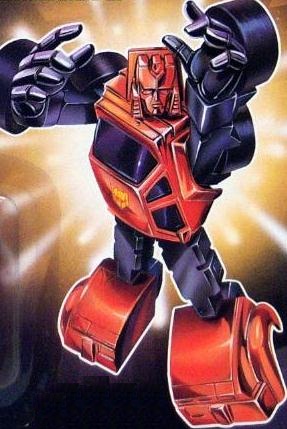 Hubcap is a communications officer assigned to Autobot City. In 2012 he was infected by a nanovirus and under its control travelled to Cybertron to serve the Dweller.

When Hubcap was captured by Sweeps and taken into Darkmount, the Dweller followed, laying seige to Polyhex. Many flying Trans-Organics breached Polyhex's walls, where they were defeated by Starscream and his Air Warriors. Hubcap, However, was able to escape and take control of the city's defenses, turning them against the Decepticons while allowing the Dweller and its minions to swarm into the city. The capitol was abandoned, although Scourge and the Sweeps remained as an underground resistance force.

In 2013, Hubcap announced that he intended to surrender himself to Decepticon authorities. However, once they arrived, Hubcap stated that his "master" (the Dweller) was "done here." Soon after, Hubcap trigged bombs his forces had planted around Polyhex, and destroyed the center of Polyhex, killing any remaining refugees in hiding and severely damaging Darkmount and Decepticon HQ.

Hubcap was eventually captured at last by the Decepticons and cured of the virus, inadvertantly saving Iacon in the process.

In 2016, Hubcap was invited to join the Wreckers.

In at least one alternate future, Hubcap becomes leader of the Autobots when times are grim and someone a little less noble and a little more willing to scavenge is needed to carry the light of the Autobots. He's a product of a very NASTY future where a lot of TFs are dead. He didn't jump at the call - the call jumped at him, when he found the matrix from Op's fallen dead body laying on the ground. Hubcap has to /be/ the hero though in that universe, to fix it all and save everything, or Astrotrain and his remaining decepticon army will ravage the bots.

Hubcapimus Prime showed up again during another dimension-hopping event.

During the Dweller TP, Hubcap was seen to use a remotely radio-controlled clone of himself as a decoy for dangerous operations.

Hubcap is a con-artist.  The fact that anyone still listens to him is a tribute to his vocal skills.

Background repair-gumby looks confused as he gestures towards a broken monitor mounted in the wall.

"Okay, we had a patient who self-identified as Hubcap, but didn't match visual records of the Minibot in question. After commiting mild property damage," The medic glances over his shoulder at the broken screen, before continuing, "The miscreant fled the scene."

<<Spinny looks zombified, who made /that?>>

The screen is dark, then optics light up bright blue, casting strange shadows. "Yes," a voice speaks up, with the speaker enshrounded against the viewpoint. "Follow, Autobots."

<<Spinny doesn't even get to spin, just droops to one side, then drops off-screen>>

December 30 - Polyhex In The Fall

Hubcap is currently played by Ralenger.

Retrieved from "https://tfumux.fandom.com/wiki/Hubcap?oldid=69169"
Community content is available under CC-BY-SA unless otherwise noted.