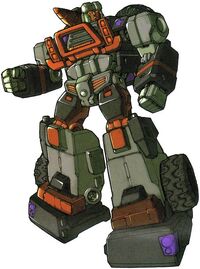 Hound likes to proclaim himself as the "Master Of Fear", using his Psycho-Projector to cause people to hallucinate their worst nightmares and incapacitate them with terror.

What he's truly a master of, however, is dissent and mutiny. Throughout the various changes in the Autobot ranks, Hound has managed to escape notice by remaining quiet and feigning apathetic disinterest. In secret, however, Hound has provided assistance to a number of attempted rebellions, including an attempted coup by Ultra Magnus, and being a secret supporter of the Old One, Alpha Trion. Ever since Trion was banished, Hound has been silently waiting for his return...

Ironically, Hound has his own deep-seated fears as much as anyone — organics and their filth scare the scrap out of him.

While in his Jeep Hurricane mode, Hound uses his turret gun to sweep over the landscape from horizon to horizon, like a radar scope, and, with the help of internal 3-dimensional simulation circuitry, stores this information as a topographical map. Error distortion is no more than one inch per 150 feet distance from point of data collection. In robot mode, Hound's turret gun becomes an infrared radiation collector. It can detect heat differentials as small as .02 degrees Centigrade, and he uses this ability in tracking machines as well as humans. Hound's shoulder-mounted Psycho-Projector can cause people to hallucinate their worst nightmares and incapacitate them with terror. He sometimes also can use it to project 3-dimensional grid laser light images of terrain maps stored in his memory.

Hound's infrared tracking ability can be countered by thermal interference. High frequency electromagnetic waves can distort or completely destroy his map-making ability. Sophisticated manipulation of such waves can even result in the recording of false images within his memory circuits.

Hound has provided assistance to a number of attempted rebellions, including an attempted coup by Ultra Magnus, and being a secret supporter of the Old One, Alpha Trion. Prime tortured Blurr and Hound, discovering that the Old One was ultimately behind the crew. In anger, Prime threw the Old One into his own unfinished Stellar spanner, banishing him to a random other universe.

Ever since Trion was banished, Hound has been silently waiting for his return. His harbors a hatred for Jetfire for foiling Magnus's near-successful rebellion.

Hound worked very hard NOT to be assigned to the Ark mission to Earth. Unfortunately he was roped in, and is now crash-landed on Earth with the rest of the Ark crew. To further his suffering, Optimus Prime assigned him to follow up on the discovery of the northern portal, forcing him to interact with the hyperactive Tasinia.

When Prime launched his attack on the Sherman Dam, Hound was assigned use his advanced sensors to guard the reservoir from Decepticon sneak attack. While in position, he met a small human who he tried to bully before being attacked himself by Skyfire. The human shot out one of his optics, and Skyfire pummelled him before throwing him far into the woods west of the dam. Hound escaped back to the Ark, and still has a missing optic and a newfound fear of humans.

Hound later found a ruby crystal mine in Burma, and reported it to Jetfire, who told him he was more than welcome to do all the mining work himself while Jetfire supervised. Hound grumbled and got to work.

Ultra Magnus discovered that the Terminus Blade was being held in the Temple of Knowledge, and hatched a plan to destroy Cybertron. After sending a warning to Jetfire to tell Optimus that Cybertron was about to be destroyed, Magnus teleported into the temple with the use of one of Wheeljack's Stellar spanners.

Jetfire panicked at the news, especially after Hound reminded him that Jetfire had denied Hound's request to build a Stellar spanner, which would have allowed them to try to stop Magnus and save Cybertron. More worried about Prime's reaction than the actual fate of his homeworld, Jetfire immediately hatched the plan to save his own aft, which Hound reluctantly went along with. Just in case, Jetfire belatedly approved the construction of a Stellar spanner on Earth.

Prime instead ordered Jetfire to build a new space cruiser, a mission Jetfire passed on to the hopelessly inadequately-supported Hound. Hound instead hid out, knowing he would be unable to help without the buy-in of the engineers, who rebuffed him. When a Stellar Spanner was built anyway, Hound was "volunteered" to test it out, finding himself teleported far over the Sonic Canyons, into which he painfully plunged to his near-death.

Hound is available for temping for the Shattered Glass TP. In the meantime, he's being temped by Bzero.