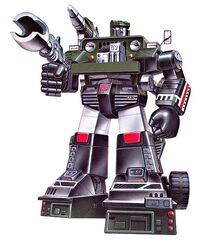 Hound would just as soon be sniffing around the Grand Canyon or Big Sur as he would a secret Decepticon base. Perhaps more than any other Autobot, Hound takes pleasure in being on Earth. Unlike his home planet, which is entirely composed of metal and machinery, he finds the natural wonders of Earth endlessly fascinating, and uses his topographical skills to store every sight he sees within his memory circuits. Hound's bravery, fearlessness, and loyalty are unwavering, like any good advance scout. But his secret desire is to be human.

While in his Mitsubishi J59 Jeep mode, Hound uses his turret gun to sweep over the landscape from horizon to horizon, like a radar scope, and, with the help of internal 3-dimensional simulation circuitry, stores this information as a topographical map. Error distortion is no more than one inch per 150 feet distance from point of data collection. In robot mode, Hound's turret gun becomes an infrared radiation collector. It can detect heat differentials as small as .02 degrees Centigrade, and he uses this ability in tracking machines as well as humans. Hound's shoulder-mounted hologram gun can project 3-dimensional grid laser light images of terrain maps stored in his memory. He sometimes also can use it to cast simple illusions.

Hound's infrared tracking ability can be countered by thermal interference. High frequency electromagnetic waves can distort or completely destroy his map-making ability. Sophisticated manipulation of such waves can even result in the recording of false images within his memory circuits.

Hound was one of the original Autobots aboard the Ark when it crash-landed on Earth four million years ago. When awakened in 1984, he was reformatted to have a terrestrial alt-mode, that of a Mitsubishi military jeep.

As the Autobots got their bearings on this strange, new planet, Optimus Prime dispatched Hound on a recon mission to find the Decepticons. The impetuous Cliffjumper tagged along uninvited, itching to start a fight, and took a pot-shot at Megatron once Hound sniffed out the Decepticon base. Cliffjumper missed, and the Decepticons gave chase. Laserbeak pursued the two Autobot eavesdroppers, and Hound took the brunt of the assault, getting blasted by Laserbeak's cannons. Hound spun out of control on the winding mountain roads and crashed into a ravine.

Cliffjumper returned with help: the Autobot medic, Ratchet. Hound was too injured even to transform, so the crane truck Hauler had to lift him out of the gulch so he could be dragged back to the Ark for repairs. Despite the mishap, Hound bore no ill will against Cliffjumper. The scout had heard enough about the Megatron's plans to plunder the Earth's resources that Optimus immediately launched a mission to stop the Decepticons.

Later, when the Autobots counter-attacked the Decepticon siege of Sherman Dam, Hound got into an underwater fight with Rumble. The pint-sized Decepticon managed to trap Hound under a pile of boulders so that he couldn't move. Then Spike Witwicky jumped in and removed the boulders, thus saving Hound from non-danger since the Autobot can't drown anyway.

After the came back from the Ruby Crystal Mines of Burma, Hound and Mirage came up with a plan to fool the Decepticons. They would create a hologram of a rocket fuel base. The Decepticons would go there to use the resources to create energon cubes, at which point the trap could be sprung. Optimus Prime agreed, and the then-imprisoned Ravage was allowed to escape with the false information. However, Megatron outsmarted the Autobots, went to the real rocket fuel base and used its resources.

After the Autobots discovered fossilized dinosaur bones inside a cavern in the Autobot volcano, Hound was accompanied Spike on a trip to the the museum, a new Earth experience that excited him. He scanned three dinosaur skeletons with his hologram gun, and the resulting holographic simulation inspired Wheeljack and Ratchet to build the Dinobots. However, Grimlock severely damaged Teletraan I when the exceptionally dim-witted Dinobots went on a rampage, forcing Hound and Spike to scout for Decepticon activity while the Autobot base computer was being repaired. Hound didn't mind the extra work, as it allowed him to do sightseeing of the surrounding Earth landscape. He managed to detect Decepticon activity at the Great Falls hydroelectric power facility and relayed the information to Optimus Prime. Arriving at the Falls, he was extremely impressed with the view. When no Decepticons were in immediate view, Bluestreak jokingly wondered about the occupancy of glitch mice in Hound's database, to the amusement of no one. Hound was among the Autobots subsequently captured by the Decepticons, but was freed when Wheeljack and the Dinobots arrived to save the day.

Hound remains one of Prime's most enthusiastic scouts on Earth.

In 2017 he travelled to Cybertron to retrieve a lost puppy. Go Hound!

In Cobra World, Hound's body was retrieved from the Ark and rebuilt into a Cobra Stinger drone.

In G.I. Joe World, Hound was recovered from the Ark and rebuilt into a VAMP Mark II. He immediately joined up with the humans to help defend Earth.