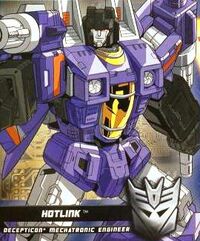 HOTLINK is first and foremost a gadget fiend – he always has his toolkit with him, ready to build whatever body extension or weapon he needs for the situation at hand. His personal favorite is a pryopathic flamethrower capable of controlling the shape of the fire that leaves its muzzle, but that doesn’t stop him from coming up with new destructive ideas on a continual basis.

HOTLINK considers each new invention a thing of beauty and gets upset if an invention is misused or destroyed. He admires the Autobots’ weapons and wishes to improve them for his own self-gratification.

In F-15C jet mode, HOTLINK is an all-weather tactical fighter capable of break Mach 2.5 in High altitudes and creating ionic acid rain storms in planetary atmospheres. He is armed with an M61 Vulcan 6-barreled Gatling cannon as well as a plethora of missiles and bombs along with his newest weapon du jour.

Hotlink was one of the Decepticon jets on Cybertron four million years ago. He shot at the Autobots Wheeljack and Bumblebee when they came near, but the Autobots managed to escape.

Hotlink was given a Terran altmode in 2013 for mission on Earth.[1]

Hotlink is available for application.