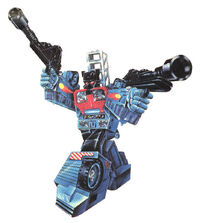 Hot Spot leads by example. Whether it's a raging battle or a raging fire, he's right in the thick of things—and that's where he's happiest. While many Autobots get into trouble by not thinking in combat, Hot Spot is a natural warrior who excels at fighting on instinct alone. His fellow Protectobots find his endless energy inspiring (though a bit exhausting), letting Hot Spot command even the most philosophically different of robots like Blades and First Aid as a tight and effective unit. He's a tough fighter to boot—strong, well-armed and well-armored.

In his fire engine mode, Hotspot can travel at 90 mph and has a range of 600 miles. His hose line can shoot streams of high-pressure water (and other non-corrosive fluids, such as oil and alchohol) an effective distance of 1200 feet. In robot mode, he possesses incredible strength: he can press 60,000 pounds. He uses a fireball cannon, which can shoot bursts of 2000 degrees Fahrenheit blue flame a distance of 1.5 miles. A special vanadium-steel alloy shields him from temperatures of up to 5000 degrees Fahrenheit. In base mode, Hot Spot can both repair other robots as well as supply emergency services to human victims, and in Emergency Car Carrier mode Hot Spot can help evacuate damaged Autobots when necessary. Hot Spot can also combine with his fellow Protectobots to form Defensor.

Hotspot’s ladder sometimes jams, locking into position when extended. His fireball cannon often backfires, releasing large amounts of the flammable liquid that powers it. Hotspot himself is invulnerable to the liquid’s effects, but the liquid can cause considerable fire-damage to anything around him.

Hot Spot is available for application.