View source
watch 01:25
Jurassic World: Dominion Dominates Fandom Wikis - The Loop
Do you like this video?
Play Sound
The name or term Hot Rod refers to more than one character or idea. For a list of other meanings, see Hot Rod (disambiguation). 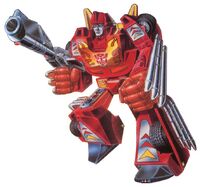 "My actions speak louder than words."

HOT ROD was the all-American boy Autobot. Not too sweet, not too sharp, not too snotty... basically a typical adolescent who had dreams of doing great things and being as heroic and important as Optimus Prime and other famous and revered Autobots. He tended to follow rules until they bug him - and he sometimes discovered, to his regret, that disobeying wasn't exactly smart. He often acted without thinking in an effort to do the right thing, which got himself and his friends in trouble. But he was not afraid when trouble arrived, and was a brave and honorable fighter and friend. In robot or automotive mode, Hot Rod was sometimes hot headed, but always was a well-meaning, admirable lad and popular with all who knew him. In vehicle mode he could reach speeds of up to 210 mph, and in robot mode carried two photon lasers, one on each arm, that temporarily electromagnetized an enemy robot's circuits.

Hot Rot spent most of his time helping Bumblebee and the other Autobots avoid capture from the Decepticons during the Decepticons' four-million rule following the Ark Massacre. Despite the dark cloud that seemed to loom over all of the Autobots, Hot Rod took joy in trying to cheer up Autobots around him, even at the expense of Autobots like Springer who Hot Rod occasionally pulled a prank on.

Almost 100,000 years before Unicron resurfaced, Hot Rod was captured by Decepticon forces when he was out patrolling for energy. For those hundred thousand years, Hot Rod was imprisoned and forced to work with other Autobot prisoners to mine energy for the Decepticons.

When Unicron attacked Cybertron in 2005, Megatron forced Autobot prisoner Hot Rod to open the Matrix that Megatron had ripped out of Optimus Prime's chest. Once Unicron was destroyed, Megatron killed this "Last Autobot," believing then that he had extinguished the final spark of the Autobots forever.

Megatron, fearing word would escape that Hot Rod was solely responsible for destroying Unicron (and not Megatron), Megatron ordered Hot Rod's remains be deposited in a remote, desolate, and unknown area of Cybertron. The Decepticon leader then threatened any Decepticon who had witnessed Hot Rod's acts or disposed of Hot Rod's remains. If word got out that it was Hot Rod and not Megatron who destroyed Unicron, Megatron would see to it that all Decepticons who had witnessed the events would be executed. Needless to say, the widely-held myth that Megatron destroyed Unicron was almost universally believed by all Decepticons.

Bumblebee, hidden underground with all the other surviving Autobots during the battle to save Cybertron from Unicron, quickly pieced together what happened thanks to a little intuition and his memories of Hot Rod telling Bumblebee that he had dreams that the former Primes were directing him while he was destroying a "giant planet-eating monster."

Though Hot Rod commanded no Autobots during the brief time he possessed The Matrix, Bumblebee ordered Perceptor to record in the annals of Autobot History that Hot Rod be given the title of Autobot Commander for his all-too-brief rule and was also acknowledged to be the first "official" successor to Optimus Prime.

The location of Hot Rod's mortal remains continues to be unknown...

In the Decepticon World "What If" universe, Hot Rod briefly turned into Rodimus Prime and destroyed Unicron. Rodimus Prime was subsequently killed by Megatron.