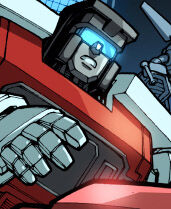 Although skilled as a surgeon, HOOK lacks the confidence and self-esteem of fellow Constructicons Scavenger and Scrapper. He sees his fellows as an inspiration, and does what he can to follow in their large footsteps. Although he's earned his place among them, Hook never feels he truly deserves to be a Constructicon. He works extra-hard to make up for his perceived weaknesses, fixing each wounded Decepticon efficiently and quickly, but with no small amount of kindness. Commander Megatron is impressed with the skill and speed with which Hook works, but no matter how much praise is bestowed upon him, Hook fears he's never quite good enough. Luckily, Hook's fears just drive him to do his work with greater and greater care and precision.

Hook eagerly join his fellow Constructicons in forming Devastator. It is only fitting that he should form the head and shoulders.

Millions of years ago, Omega Doom was a member of the legendary Guardian robots, and was charged with defending Crystal City, the most spectacular city on Cybertron. He befriended the Constructicons, the city's creators. However, RECENTLY, the Constructicons were attacked by Emperor Prime's Robo-Smasher and nearly converted into Autobots (all but Hauler managed to get away). The now-evil Hauler convinced Omega to leave his post to help defend another city, and promised to look after the city in his stead. When he left, Emperor Prime demolished the Crystal City, while Starscream watched in horror. When Omega learned what happened, he tracked Hauler down and tried to change the builder back into a Decepticon, but the process was irreversible, and the treacherous former Constructicon lured Omega into an ambush by the Smasher. The Robo-Smasher attacked Omega, convert him into a truly evil, soulless monster. The rest of the Constructicons joined resistance leader Megatron, trying to undo some of the damage done to their beloved planet.

For much of the war, Hook remained on Cybertron as second in command of the Constructicons, defending civilians from Junkion assault.

In 2016, however, Hook took an ill-fated trip to Earth, and was nearly killed on the way by Emperor Prime.

Hook is Chief Medical Officer of the Decepticon army, as well as second in command of the Constructicons. He reports to Scrapper, who reports to Nemesis.

Hook was available for temping for the Shattered Glass TP.