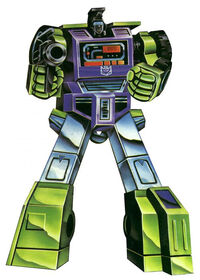 The snob of the Constructicons, Hook considers himself an artist. He looks upon the rest of the Decepticons almost as peasants, beneath him to a degree. Though full of himself, Hook is a master craftsman, having truly earned his insufferable ego. His high standards that he holds himself and others to means he takes extra care to ensure even the most simple of jobs is completed to the nth degree of perfection. Although Megatron acknowledges Hook's incredible skill, he gets impatient with the time it takes Hook to finish his work. Hook cannot understand the frustration at the delays this causes, he just sees it as doing the job right.

Hook condescends to join his fellow Constructicons in forming Devastator. It is only fitting that he should form the head and shoulders.

The Autobots' desperate attempt to launch the Ark ended in failure, and the majority of Iacon's inhabitants were permanently off-lined. Megatron killed Prime with his bare hands and took over Earth. Megatron also reigned supreme over Cybertron, as well as many other worlds conquered by the Decepticons, now truly an Empire. The few survivors of the Ark Massacre lived beneath the surface of the planet, determined to survive no matter the cost.

Hook was tasked with being Megatron's personal medic. The master craftsman devised a way to attach the Autobot Matrix of Leadership to Megatron's cannon, giving the Decepticon almost unlimited power, which he used to take over scores of worlds after the Autobots were forced underground.

Hook is usually portrayed on the MUX as second in command of the Constructicons. In the Decepticon World universe, he was Megatron's personal medic.

Hook was temped for the Decepticon World TP.